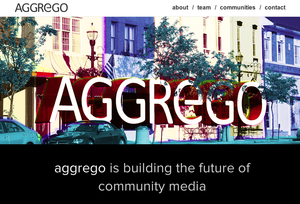 It seems likely that Aggrego will operate similarly to Journatic, which Wrapports Ventures President Tim Landon helped develop, according to Crain’s Chicago Business. The Sun-Times group originally intended to use Journatic’s services, but the content provider opted to work with competitor Tribune Co. The Tribune eventually stopped using the service after finding it had used fake bylines and evidence of plagiarism and fabrication, according to a Tribune email published by Jim Romenesko on his website last July.

But Landon said he realizes that Journatic made errors, and Wrapports said that he sold “most/all” of his stake in Journatic to Tribune, according to Poynter.

“I fundamentally disagree with Journatic’s management’s approach to the content and operating model,” Landon said in an interview with Poynter. “I do believe in data and big data, but that’s not enough.”

Aggrego has been producing content for the Sun-Times’ suburban Chicago papers, namely the Pioneer Press chain, for several weeks now, according to the Chicago Business Journal. Articles are given the byline “Wrapports news services.” Topics include crime and local events, encroaching on Sun-Times reporters’ territory. Aggrego’s website says the company relies on “data collection, data analytics, and visualization technology” to produce content.

The Chicago Newspaper Guild claims that outsourcing work in this way is against the law: “That’s our work — that’s our jurisdiction,” Craig Rosenbaum, the union’s executive director, told Crain’s. But Wrapports denied the Guild’s accusations as “flatly inaccurate.”

Aggrego’s website displays portrait photos of 44 recruits, some of which were former Journatic employees, according to Crain’s. The website does not include bios or information on where the employees are based, but the Chicago Business Journal notes that they are not part of the Newspaper Guild. Aggrego is based in Chicago.

But if Aggrego can be compared to Journatic, it may use some of the criticised cost-cutting measures for which its peer came under fire. Last year an investigation by radio show This American Life found that Journatic relied on “information collectors” in the Philippines, Brazil, Africa and Eastern Europe to write for as little as 34-40 cents per article. Such compensation would mean Filipino workers would have to write 22 stories per day to make the average annual national wage of US$2,000 (as of 2010). The employees were assigned aliases under which bylines appeared.

Ryan Smith, a former Journatic copy editor who leaked details to This American Life, said that the assembly-line system seems to violate some of the most basic principles of journalism. With Journatic’s processes, breaking news could be muted in favor of data-heavy stories such as local schools’ lunch menus, which can be obtained from thousands of miles away. Shortly thereafter, Journatic’s Brian Timpone posted a “Letter to customers and readers,” on the company’s website, in which he explained how the company operates and addressed its critics.

Outsourcing is becoming a popular cost-cutting solution, with 17 percent of newspaper executives saying they plan to use the tactic soon in a 2010 World Newspaper Future & Change Study. About half of publishers that have outsourced functions reported savings of between 15 and 25 percent, and only 8 percent of media management does not support the option, according to the study. Outsourcing “has saved our publication,” James MacPherson, editor of Pasadena.now, previously told WAN-IFRA. “We wouldn’t be a viable business without it.”

A number of other publications, including Telegraph Media Group, NPR, the Boston Globe and Virginia’s the Daily Press of Newport News, have outsourced some functions, though less controversially so. Pasadena.now hires Indian writers at a more liveable wage, USD$7.50-$10 per article. Yet that price is still less than an American reporter would be compensated, though some argue that the extra money is well-spent on a journalist knowledgeable about his or her community.

At the same time Wrapports has been expanding by purchasing the Chicago Reader and launching society tabloid Splash and business magazine Grid, the company has been working to slash budgets, Crain’s reported. The Sun-Times recently cut its entire photography staff and closed its suburban office, asking reporters to instead work from home.

Updated 19 August to include quote from Landon.