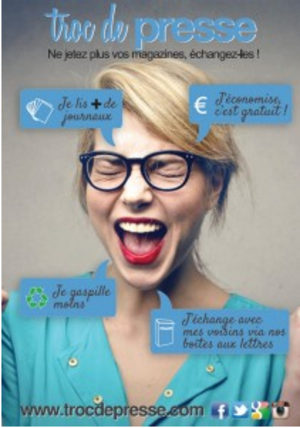 Created by Julian Fuentes and operational since the beginning of June 2013, Troc de presse seeks to encourage the exchange of print publications whilst strengthening social ties and introducing individuals to new titles. In its first full month the site attracted 600 users, who are able to find one another through the sites geolocalising technology.

With almost 45 per cent of France’s inhabitants living in apartment buildings or multi-family dwellings, the project relies on would-be swappers promoting the scheme amongst their fellow residents. Fuentes was inspired to create the site after realising that he and his wife systematically found themselves throwing away the 4-5 print publications they consumed a week. Likening the service to ‘leaving magazines in the doctor’s waiting room’, Fuentes insists that the potential for establishing stronger social ties with neighbours will encourage people to sign up, rather than simply leaving their unwanted newspapers in the lobby.

Though it would be reasonable to fear that Troc de presse might discourage newspaper sales, the French press has been fairly open to its ethos of collaborative consumption. The day of Troc de presse’s launch Le Monde published an article on the social network that gives print “a second life.” More recently, this week L’Express covered Troc’s fortunes in its first two months in action, joining Le Figaro in highlighting the potential for partnerships with France’s press organisations.

Some however remain unconvinced. The very real problem of dwindling print consumption, as digital becomes the primary focus for the majority of major news outlets throughout the world, is central to the criticism levied against Fuentes’s site. After testing Troc de presse, unimpressed startup blogger Liam Boogar concluded: “After confirming my address […] I finally got to see what my neighbours have to offer, and stumbled on the most obvious problem: no one around me uses the service. Most likely because no one around me subscribes to newspapers – or if they do, they get it on their computer/tablet/mobile phone.” However, if figures reported by Le Monde are correct, 4 billion copies of print publications are sold every year. Fuentes meanwhile told website jaimelesstartups.fr that 60 percent of French households subscribe to at least one journal, and 35 percent of the French population reads one newspaper or magazine a day.

If, as LeFigaro suggests he will, Fuentes attempts to reach out to news and magazine titles in order to form collaborative subscription partnerships, Troc de press could establish a new niche for itself. An alternative model might see the cost of subscriptions to certain magazines, journals and papers shared amongst Troc de presse members, not unlike the system already advanced by John Batelle. Earlier this summer Battelle proposed the adoption of a group-buying model that would see the fee for accessing a single article decrease according to the number of people reading it. A collaborative scheme for individual articles would likely be impractical, largely due to the speed with which news breaks and is updated, but a similar model for newspaper and magazine subscriptions could have legs.

Facebook and LinkedIn are already proving that social networks have the potential to develop beyond their original identity to assume new roles and functions. Despite barely having a fraction of the reach and influence of other social media resources, Troc de presse could nonetheless eventually serve as novel incentive for taking out a group newspaper subscription.

The shift to digital will of course continue undisturbed by such initiatives, but in the short-term news organisations could have a new means of generating interest in print.