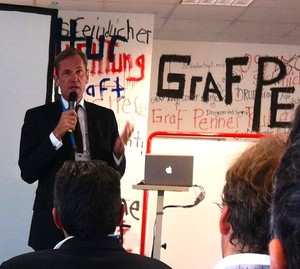 Axel Springer is mixing in new circles. On Thursday 5 Sep some of the cream of venture capital mixed with the first startups to graduate from their Axel Springer Plug&Play Accelerator in Berlin.

In his opening words at the Demo Day, AS’s CEO Mathias Döpfner was open about their ambition to be “the leading digital media company” while recognising that “we have to reeducate ourselves”.

Part of this reeducation involves understanding the whole process of early stage investment, and it would be hard to find a better partner than Plug&Play, the Silicon Valley based accelerator that hosted and invested in Google and Paypal from their early beginnings.

From their side Amidi is hoping to help AS “think bigger (…) and then go global”.  And this means they want to “build a bridge to California”.

The culture is definitely different. AS’s CTO Uli Schmitz has given free rein to a young and sassy team to build a proper startup hub outside the walls of Axel Springer HQ in central Berlin, albeit barely 200 metres away. The first step? Getting the new startups to grafiti the walls with garish slogans and even a few english expletives. Döpfner joked that his decision to wear a tie suddenly seemed like a bold alternative statement.

Smart, confident and impressively cleancut, the startups guys were high quality, attracted by the €25k seed funding and the chance to find synergies within the AS’s media empire. Some had indeed already met their initial funding goals and were simply talking about possible further funding rounds in 2014.

Interestingly, for publishers looking to follow their lead, the Axel Springer Plug&Play drew the net quite wide with a focus more on tech than media. Although you could often spot the link back. For example antique dealer portal Classiqs has relevance to their classified business and headphone music optimisers Solid Sound could be marketed through their magazines and journals.

By far the most directly publisher related was Asuum, which Schmitz suggested might be pronounced ‘awesome’. A form of native advertising, their system allows products to be promoted within the space usually reserved for publisher content. Already live on Bild der Frau, their expertise on semantic and sentiment analysis allows a publisher to simply add one line of code on page which is then searched by the ad platform which serves a relevant product.

So this was a real celebration for Axel Springer who have already selected the next cycle of startups who will report back in Jan 2014. And Plug&Play themselves? They are already looking for publisher partners in other European countries, including the UK.