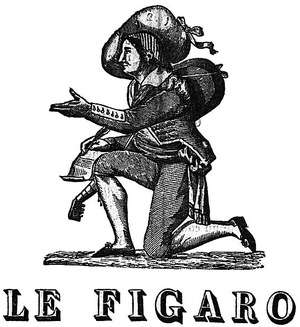 Magazines including Le Figaro Eco and Le Figaro Magazine have become the financial heart of Le Figaro group’s operations. A glance at the latest edition of Madame Figaro, the paper’s fashion offering explains the attraction of this magazine-focused model. This month the fashion title’s page of contents is hidden behind thirty-three pages of glossy advertisements and every other page is dedicated to showcasing the wares of top designers. Of course, bumper editions in September are nothing new for established fashion bibles like Vogue, but for a magazine billed as a ‘supplement’ to Le Figaro‘s Saturday edition, Madame Figaro’s 320 pages for this month is rather out of the ordinary.

According to figures from April 2013, magazines generated €230,000 for Le Figaro group in the previous year, compared to the €170,000 produced by Le Figaro itself. Little wonder then that the news publisher is continually adding to its collection of magazine titles. In 2012 Le Figaro group began publishing Le Figaro Histoire and just last month the French publisher relaunched its fabled celebrity magazine Jours de France. French business publication Les Echos reports that this latter title has returned on an “experimental” basis, with an initial budget of 500,000 euros – though this could increase should the first issue prove popular.

Pew Research Centre‘s State of the Media report for 2012 shows that in the US, the number of ad pages sold by magazines had declined over the years since 2010 by 3.1 per cent, as media organisations struggle to return to pre-2007 levels. In France however publishers continue to put their faith in magazines. Already this year Condé Nast unveiled Vanity Fair France, the first edition of which enjoyed considerable success, and cult 60s male title Lui has been revived by businessman Yves le Fur.

Focusing on magazine content has also allowed Le Figaro group to boost its digital offering, notably through i-mad, an app designed around Madame Figaro. Le Figaro Group has revealed that its New Media business unit produces 20 per cent of the organisation’s sales, and reaches “13 million French Internet users a month”, making further forays into the tablet and smartphone friendly content a matter of course. In a media climate where paid digital content is becoming a key financial element for France’s main news titles, Le Figaro‘s digital magazine sales are increasingly compensating for the losses incurred by its main ‘pure news’ product.