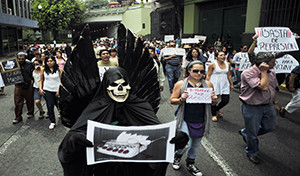 Journalists and students protest the murder of Mexican journalist Regina Martinez, in Xalapa, Veracruz State, Mexico, on April 29, 2012. Martinez was founded dead in her house last April 28, with signs of strangulation. More than 40,000 people have been killed in rising drug-related violence in Mexico since December 2006, when President Felipe Calderon deployed soldiers and federal police to take on organized crime. AFP PHOTO/SERGIO HERNANDEZ

The following was originally published as an open letter on behalf of the World Editors Forum in South Africa’s Citypress on Sunday, 15 September.

President Jacob Zuma’s comments this week regarding Mexico’s press betray a deep misunderstanding of the role of the media and the profession of journalism. Furthermore, his interpretation of “patriotic reporting” is an insult to the dozens of murdered Mexican journalists whose work made them targets of organised crime.

Perhaps President Zuma was not reading the right papers on his trip to Mexico. Maybe his Spanish is not up to the challenge of navigating the county’s blogosphere to unearth the reality of news reporting.  Or perhaps the president’s assertion that he knew nothing of the country’s “rampant crime” was pure ignorance on the part of a man who sees the media as mouthpiece useful only for the good times.

Mexico’s press has been under attack almost daily for its efforts to expose the reality of the country’s situation. Since December 2006 – the beginning of the so-called “War on Drugs” – 41 journalists have been murdered with almost total impunity, while concrete steps have yet to be taken at any level of government to address on-going safety concerns.

By December 2012, as former President Calderon’s administration came to an end, the official death toll for those caught up in the violence stood at 60,000. Unofficial figures put the number closer to 100,000. Is President Zuma genuinely suggesting the reasons behind this horror should not be reported, investigated and exposed for fear of triggering a marketing disaster?

The truth is the reasons are indeed exposed, but often those doing the investigation – journalists, largely, as the breakdown in the state apparatus has led to many of the crimes committed under the guise of the “War on Drugs” being committed by security officials and corrupt authorities, rendering the official response woefully inadequate – are at best warned off the story, at worst murdered for their endeavours.

Accepting the 2012 Golden Pen of Freedom, the annual press freedom award made by the World Association of Newspapers and News Publishers (WAN-IFRA), Anabel Hernández, one of Mexico’s most outspoken journalists, dedicated her ‘prize’ to all Mexican journalists “whose voices have been silenced” and to those who continue daily “to set an example in their duty to inform and denounce at whatever cost.”

From the podium in Kiev where she accepted the award before the world’s assembled press, Anabel continued: “I will fight until my last breath, even if it is a small example, so that as journalists we are not brought to our knees before the drug state… I know that I have nothing but the truth, my voice and my work as a journalist to defend myself with.” This is not a journalist who concerns herself with public relations for the sake of selling a distorted image of her country.

Silence kills democracy Mr President. Mexico is the prime example of this in recent times. If the press is muzzled – by violence or simply through instructions to report only positive news – its watchdog role that you so deride is stifled. Such a situation profits only those with something to hide.

It is for this reason that the controversial Protection of State Information Bill, now back in parliament, is a dangerous road for South Africa to walk and should be reviewed and modified at all cost. Transparency and accountability are virtues of strong governance, whereas attempts to cloak under a veil of secrecy the inner workings of state are a sign that things are not at all well in the corridors of power.

The masses that elected you President Zuma in turn do elect their watchdogs. Sales and circulation figures of the independent press in South Africa will give you a simple idea of just how many are interested in keeping a watchful eye over your administration. A quick browse online will inform you just who represents the people. As custodian of South Africa’s democracy it is your job to listen to them.

By no uncertain terms is it your job to instruct the press on how to report the successes and failures of the South African dream. The truth cannot be hidden, especially in this digital age, and as we have so tragically seen in Mexico, such dreams turn quickly to nightmares if the press cannot freely speak.