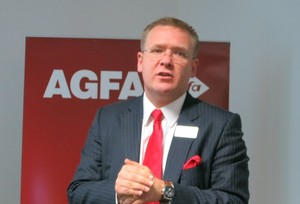 Arkitex Eversity 2.0 is an SaaS solution that automates the workflow and makes it easier to share content on socila media.

Thomas Kaulfuß from Sächsische Zeitung (SZ) in Dresden described his newspaper’s new app, which was developed in partnership with Agfa Graphics and permits the transfer of the basic design of the print edition to various mobile devices. HTML5 is used to make a clear separation of style from content.

“We wanted to win over the traditional readers and attract young ones as well,” Kaulfuß explained. “We were looking for an app solution that offers both automation and a good reader experience. Agfa Eversify gave us a good start into mobile publishing.  It is not a full-fledged solution, so we have limited features, but we were able to automate the process without having to invest a lot of money.”

Tony Nouwen of Coldset Printing Partners (CPP), a joint venture of the Belgian media groups Corelio and Concentra, reported how the company manages all its prepress activities in the Agfa Graphics cloud. “Our total production is done in the cloud that Agfa developed for us,” he says. Tony Nouwen explained the project on Monday afternoon at the MediaPort Workflow Efficiency.

At WPE 2013 Arkitex celebrates its 10th anniversary with the launch of Arkitex Production, a new production workflow.