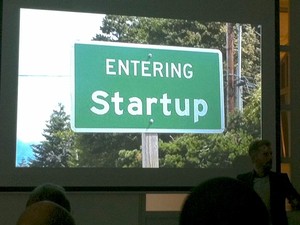 Some estimate that Berlin has more than 2500 startups: a vibrant entrepreneurial scene supported by cheap rents, hip co-working spaces, several bootcamp incubators and a large developer community. As publishers like Axel Springer start their own Berlin based accelerators, our evening tour with the team from kindai:projects was a chance to check out some of the top themes and trends in German media startups.

“I’m very much into this paid content thing” said Heiko Scherer of clapp, serial entrepreneur and now angel investor. But this does not make him a news publishing expert. In fact before starting Clapp and developing the Handelsblatt mobile app with KircherBurkhardt, Scherer had worked everywhere except publishing – most notably in pay TV and video.

It turns out the customisable newstream was the killer app for Handelsblatt readers. And early digital printing pioneers niiu have taken this one step further in allowing paid subscribers to curate their own news app on tablets, taking the best sections from German national media. For example, you could mix the sports section of Bild with the economics coverage of Tagespiegel.

Those examples are subscription only, but for those with a freemium content strategy, how do you decide what content should be paid? Meetrics offer a real time analytics engine with clever algorithms to turn time of page into realistic measures of engagement – for example by calculating the length of time it takes to scroll through the page. Longer engagement might signify a candidate for premium content.

On mobile, many companies are monetising their content using the same mode as Facebook and Twitter – with sponsored content. This is a core feature for hyperlocal website QIEZ (from the Berlin word for locality – ‘Kiez’) who work with small companies to better feature their shops and restaurants. It’s also a big earner for design world darlings Freunde von Freunden who recently linked up with Mercedes to make their distinctive portraits of classic car owners.

Several publishers on the tour were most excited by dotdotdot, one of Scherer’s new companies – a social reading platform that allows you to import text into one place and archive the stuff you normally lose. And if you are looking for pure tech magic, then look no further than SpryLabs and their augmented reality app Dark Eye. Berlin will never look the same again.