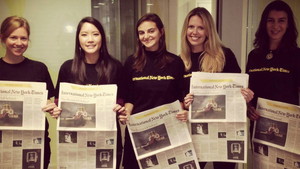 Various tributes and homages have been paid to the celebrated International Herald Tribune, including a special interactive online publication of its first ever edition, while Serge Schmemann commemorates the paper’s history in his recent elegy. He notes the ways in which the IHT has progressed and changed since its earliest stage as The New York Herald, aiming evidently to comfort those readers who
are lamenting the dissolution of the iconic IHT name today. As Schmemann acknowledges, “by its 100th anniversary … The Trib, aka the IHT, had become ‘the first global newspaper.’ ”

The launch of the INYT is aiming to push the NYT’s international reach even further. Jill Abramson, executive editor of the NYT, seems to have a particular interest in taking on the UK market, and told Ed Pilkington, the Guardian’s New York correspondent, that she wants the INYT to become “the international provider of the highest quality news and information.”

As Pilkington explains, the statistics clearly demonstrate the opportunity for growth that will come with this focus on an international market. “Only a tenth of the NYT‘s paid digital subscriptions of about 700,000 come from outside the US, and though Britain is its third largest web audience the UK represents only 4 percent of total traffic (the US accounts for 66 percent and Canada 5 percent).”

The rebranding of the paper forms “a central component of a stepped up global-growth strategy,” as Christine Haughney reports. “Many of the company’s major initiatives involve shifting from a reliance on advertising” and these initiatives range from news-based schemes such as apps and video coverage, to events and conferences with NYT reporters as expert speakers.

Crucially, what unites all of the proposed initiatives is a reliance on quality journalism and reporting as the lifeblood of the paper. In celebration of the initial launch, various promotional events are running throughout this month and the paper are “offering unlimited complimentary access” to all of its digital publications until 19 October.

The coverage of the rebranding during the past few days, both from the NYT itself and from other sources, has celebrated the illustrious and literary beginnings of a very well-respected newspaper.

This homage to the past highlights the paper’s long-standing role as an international publication, and also reinforces the sense that whilst the paper has developed and changed over time, it has always remained committed to top quality reporting. The INYT seems set to continue on this same path, with an even greater international focus than ever before.