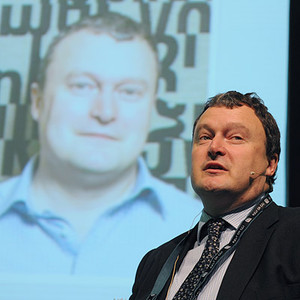 Speaking at the Expo opening celebration, Miller shows real-time information on the terms Google users are searching for that lead to the Guardian site, plus graphs of traffic from Twitter, Facebook, Reddit, and other platforms. It is important for the newsroom to get feedback on what stories are being consumed when and where, says Miller. “We need to go where our readers are. There’s no point in pretending they are not” on those platforms, he says.

The paper has 120 engineers, he says, and its philosophy is to “keep trying things. Some will work and some won’t.”

He says the Guardian is “chasing” content marketing deals, but will not compromise its journalistic reputation.

“We are not anti-paywall,” and do anticipate charging for more content eventually (the iPad app already carries a cost). “But for now we want to increase our engagement internationally,” Miller says.

“Mobile is an opportunity, not a problem, although the business model is even worse than it is on the desktop.”

Commenting on the Guardian’s U.S. operation, Miller says there are 35 journalists and 15 commercial staff. It has been interesting to find out “how you run an all-digital newsroom,” he says.