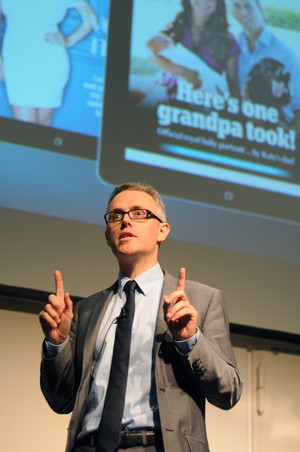 Field took the stage at #TAS13 swiping his tablet app to the sounds of Pucini, played directly from the Mail Plus app. With a readership with an average age of 58, who love print but now love tech, he was tasked to “re-imagine the Mail on a tablet”.

Mail Plus is a bold statement. On a daily basis it has 185 individually designed pages, the majority with interaction. That includes a daily 360-degree panorama and hundreds of photos. And perhaps most crucially, no less than 30 interactive puzzles and more than 200 channels covered by its TV guide.

All this encourages that crucial tablet intimacy, something that carries over into its interactive advertising, giving Mail Plus the added engagement that La Presse and Axel Springer described earlier in the Tablet & App Summit.

As the media promotion campaign ramps up they are trying to keep both so-called “Tentative Tappers” and “App Adventurers” happy. The feedback from readers has been positive with one saying, “you’re obviously getting more than you do with your print copy.”

But are they parting with their cash? With a price of 9.99 pounds, it’s actually half the cost of a printed subscription and so far they have 23,000 digital only subscribers. Field freely admits “we don’t yet know if this is the answer”.

If you want to follow Mail Plus’ lead – be prepared to resource it. Their design-focused approach uses Adobe DPS and it takes a team of 8 designers, 12 editors, 1 video and 1 photo editor, 12 hours each day to create the final product.

But in a world where breaking news is no longer so relevant for a daily edition app, Field said he believes luxury is the right way, in which case Mail Plus will have a bright future.