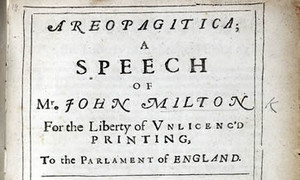 Brian Leveson dismissed suggestions that the system of press regulations that he has proposed basically amounts to “statutory regulation” on Friday in a House of Commons live debate. The current proposed charter, however, even in its newly revised state (the full charter can be found here), is still criticised by many as signalling the end to press freedom in the UK.

Bob Satchwell, the head of the Society of Editors, has warned that with the proposed charter Britain “wouldn’t have a free press any more,” and added that “the things which are being proposed at the moment would be totally unconstitutional in the US and other countries.”

Boris Johnson, the mayor of London, has also recently spoken out against the charter, arguing in his Telegraph column that “We are on the verge of eroding the freedom of the press,” and asserting that the reason Britain is “embarking on this monstrous folly” is due to “a string of essentially political embarrassments that led to the Leveson enquiry.”

Listing a series of reasons as to why the charter can only be a bad thing for the state of the British press but also British society, Johnson concludes his article by raising the pertinent point that the charter “is so completely pointless” because we live in a world where information can be disseminated instantly across the globe with the push of a button.

As Dominic Ponsford writing for Press Gazette explains, the “poll took place on Monday and Tuesday last week, before the Royal Charter was published,” and a majority of 56 percent agreed with the statement “I want the newspaper I read to participate in this new system of regulation and will be disappointed if they don’t.”

Shadow culture secretary Harriet Harman has urged newspapers to “try out” the proposed system, saying that a situation “where politicians control the press” is the “last thing” that the government want. However despite insistence from its supporters that the charter is not impinging on models of press freedom, the implications of introducing what is fundamentally a subjective regulatory body to govern the UK’s press are worrying.

Jonathen Freedland’s powerful article in the Guardian on Friday makes it clear that the solution to press regulation issues in Britain “must not involve a royal charter and the privy council. Otherwise it will hand a gag to the most secretive elements of the British state,” and the state, he argues, “are itching to use it.”

Ministers are hoping to have the new charter “sealed” by 30 October, leaving just a couple of weeks for an alternative proposal to be thought up and agreed upon before what many journalists would consider a nightmarish situation becomes a genuine reality.