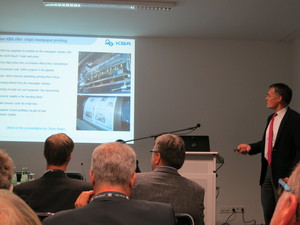 Clearly in the focus this year is the new RotaJet digital press. A model of the press can be seen at the “Digital Print Moves” pavilion in Hall 2. Although there are two projects that are close to conclusion, KBA did not yet announce the names of the clients who decided to buy the new KBA inkjet press (they are not in the newspaper industry). Oliver Baar, Project Manager Digital Web Presses, said when the press was presented for the first time at drupa 2012, the print quality was not yet at the desired level but now “the quality is at offset level,” he confirmed.

As for conventional offset and waterless offset presses, two Commander CT, three Commander CL and one Cortina press were sold this year. The Cortina was ordered by the Trierischer Volksfreund in Germany. The newest order for a double-width Commander CT came from Mittelland Zeitungsdruck (AZ Medien) in Aarau, Switzerland. The 80-page press line will be equipped with two eight-high towers, a four-high tower, five reelstands and a jaw folder. Production will start in September 2014.