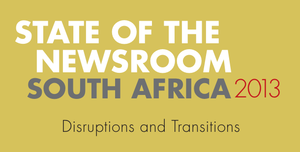 Katy Katopodis, who is group editor-in-chief of Eyewitness News that serves several radio stations in the country, told the researchers “the more senior, the easier they have adapted. The more junior, the more overwhelmed they feel and that is where we do give them support…”

Steve Matthewson, managing editor of news at Business Day newspaper and the BDlive website, said in the report: “The stereotype about age is not true, [that the young find it easier to adapt]”.  Some journalists needed to get beyond the embedded systems they were accustomed, he said, while others – irrespective of age – jumped in with enthusiasm, he said.

The report, which was written by Dr Glenda Daniels of the University of Witwatersrand in Johannesburg, was released today and came up with other surprising conclusions.

The researchers found, for instance, that although interviewees across nine newsrooms could see no particular endpoint for the digital-first strategy, the “changes from traditional news media to digital enjoyed a more positive welcome than a negative one although some journalists were struggling with the multitasking required.”

The report does not aim to be comprehensive, says Wits Journalism head, Prof Anton Harber, but  for it to provide an overview of the landscape of the South African news industry with research into areas such as race and gender in newsrooms, social-media strategies, the rulings of the local Press Ombudsman and training at the big media companies.

The State of the Newsroom report follows the release last week of a report by a task team set up by South Africa’s print and digital owners into calls by the ruling African National Congress party for a transformation charter for the industry.

The task team rejected a transformation charter – that has been opposed by newspaper editors as a back door to regulate the press inappropriately – but demanded more rigorous implementation of existing Black Economic Empowerment codes.

For more about the State of the Newsroom report, go to this story on South African media website Grubstreet and you can download the full report here.