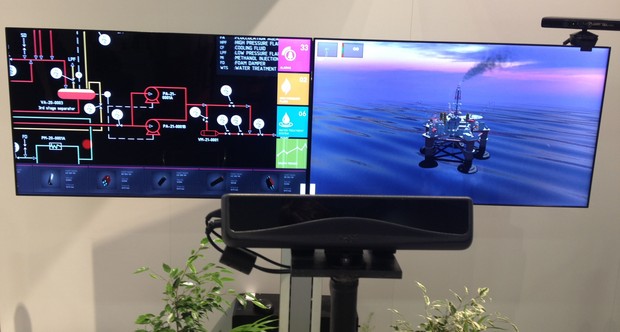 That’s the glimpse into the future that ABB’s early prototype called Tobii Eye Tracker, bolstered by Microsoft’s Xbox Kinect, was demonstrating on the company’s stand during Expo.

ABB is a leading global player in power and automation technologies. For newspapers, the company has carved out a niche for sophisticated workflow solutions across the newspaper production chain.

But the company can draw on its vast corporate R&D resources and in the case of the Eye Tracker, which is being developed in ABB’s Swedish research centre that focuses on the field of man-machine interfaces, it is the first time it has been shown to the newspaper industry.

Essentially, the eye tracker follows a person’s eye movements which are then projected on a 3D model screen, in this case showing an oil platform in the ocean. Imagine the scenario on an oil rig where workers’ hands are either, uh, oily or they use very large gloves. Hands-free operations would make sense.

So… in the demo, you simply zero in on a certain component of the rig, then with one side swipe of your right hand, that component is zapped over to another screen that features a schematic of the oil platform. Once your eyes are there, you can then focus on different graphical interfaces/charts, such as alarms on the rig, trends in production, etc.

“We are not saying that this is the future of technology, but you can see how it could fit into a newspaper operation,” said Steve Kirk, Head of Marketing, ABB Switzerland.

Of course the company was also featuring its array of traditional newspaper solutions, such as its new modular retrofit feature. The company says these can be tailored to almost any press type, extending the life of newspaper presses. Different solutions are available to meet different needs and include drives, controls, control console and press management system replacements.

ABB is also showing the latest releases of its production management systems that it says optimise the entire newspaper production process up to and including delivery.

Going back to the future: we will keep our eyes focused on ABB’s Eye Tracker technology development, with all hands on deck.