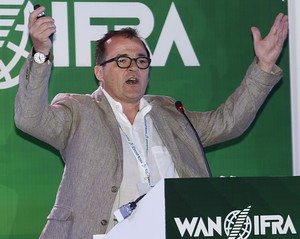 Michael Cooke (pictured) and Ali Rahnema, the respective Editor and VP of digital media of The Toronto Star emphasised that “our traditional business model is not broken – broken means it’s fixable.”

The Toronto Star is Canada’s largest daily, and its website, thestar.com, has more visitors than the next two newspapers combined.

“We’re seeing print dollars translate in to online dimes in to mobile pennies,” they say, so they’re trying a host of new approaches. Their first job was to train journalists in SEO (search engine optimisation) and video.

Then they outsourced all print production – and reinvested the savings in the paper.

The paper has partnered with companies, such as a series of videos teaching photography – sponsored by Canon for C$100,000.

They’ve had a lot of success with behind the scenes videos by the reporters, telling how they got the story. They also established a relationship with Google, seeking its guidance on how to maximise its online advertising. They found writing a short article about Google’s Doodle helped the newspaper’s ranking.

The paper has also been experimenting with crowdsourcing journalism as a way of engaging its readers. They opened up 500,000 Toronto school board records, inviting readers to weigh in. Public documents, such as council meetings, are being refashioned taking the disparate data and making it presentable and understandable on the website.

After paywall success, FT turning its attention to mobile

Speaker Rob Grimshaw, the Executive Director of ft.com said the Financial Times’ paywall has been a resounding success – 350,000 digital subscriptions to 260,000 print subscriptions. Now they’re focused on mobile, something they feel – along with the rest of the newspaper industry – they’re late in coming to.

The average smartphone user checks their phone numerous times throughout the day. On mobile devices, they’ve found spikes in when they’re used – the highest time being the early morning. This will force more changes in when content is delivered – at the moment, early morning is when journalists are coming in to the office to start their day. Partly to respond to this, they’ve created Fast FT, with eight journalists around the world dedicated to turning out stories “in minutes not hours,” Grimshaw says.

There’s currently an imbalance – mobile takes far less a share of ad revenue compared to time spent on mobile devices – but that will change: “Money will follow the eyeballs.” Even so, mobile ad market is growing rapidly – Pandora is on track to generate around $500 million in mobile ads alone in 2014. Newspapers are not focusing enough on mobile – if they’re lucky, they have a couple of people working on mobile. At ft.com around 15 percent of their development staff is dedicated to mobile.

As they are redesigning how articles are being read on the website, they are starting with how to make it best for mobile apps and working back to the desktop. As they look to the future, the paper is contemplating an audio version of the FT, even talking with car manufacturers about having the FT pumped in to the car, so people can listen to the newspaper on their way to work.

Another big jump will be payment method. At the moment, they’re stuck with credit cards, but “the wallet and the mobile phone will converge.”

Matt Skibinski from Press+ gave an overview of the benefits of using a pay meter model for digital content. The most important conclusion being that there is no downside to installing one. Today, most North American newspapers have some sort of a paid model, either a meter or a paywall.

While there has been no sign of any negative effects of the paid model, the success of a paywall or meter depends greatly on the newspaper. The standard metered model gives the home page for free and lets the reader access a limited number of articles.

Skibinski stressed that it was crucial not to surprise the reader that they will have to pay to see more, the best way was a series of reminders counting down the articles the reader has left.

The best reminders had buttons that could begin the subscription process immediately. The benefits of a good paywall and metered site can be immediate. Rather than the fear that they might lose online advertising, Skibinski says publishers have found there is an advertising gain, a typical model charges 30 percent more for ads behind the paywall.

The average stop meter where customers will have to pay is constantly going down as well. In July 2013, the average was eight free articles down from 13 in January 2012. The majority is now set at five or fewer free articles.

Furthermore, many newspapers have felt confident enough to raise their prices – the average price is now US$ 9.26 for a month’s subscription, up around 50 percent from 18 months earlier. Interestingly, there’s little correlation between the publication’s size and the price for digital subscription.

A plus is to push for a bundle package, digital and print subscription. For example, the McClatchy group in the U.S. found that 86 percent of its print subscribers would accept a higher price if they also got the digital subscription.

Ana Busch, the director of digital strategies committee for the association of newspapers (ANJ) in Brazil, talked of Brazilian paper’s experiences with paywalls. Folha allows 10 free stories a month, but if the reader fills out a simple form they get another 10 free stories. They found that since the paywall, there are 5 percent more page views and 12 percent more unique visitors.

Another paper, Zero Hora, implement a paywall in 2012 and saw 48 percent rise in audience the following year. All Brazilian newspapers that have installed paywalls or metered sites have been very happy with the results. She added that Folha has offered to share the paywall system with any newspaper that requests.

Newspapers have found peak for page views is between 10am and 3pm, with higher views on Thursdays.

Lindsay urges newspapers to unbundle the product, break it down in to its components; sports, business, culture etc. Just as the music industry, broke open albums to sell individual songs, so newspapers should look to sell more specific parts of its overall product.

Subscribers tend to read what they can’t get elsewhere; local news, sports, editorials and politics. What is not so highly valued is that what can be found elsewhere, such as national news or travel articles. For that reason, Lindsay suggests making meters much more flexible; the sports section, as highly valued, could have a lower limit of articles, while the national news section could give away more free articles.

Alexandra Salomon from the IAB revealed the latest ads they’re looking to put on newspapers. Called Rising Stars, the ads are a canvas on the newspaper’s website, but even as the user clicks and moves around the ad, it stays on the newspaper’s site. They’re more interactive, more engaging, more effective and the publishers keep the relationship with the consumer because all the advertisements remain on the publication’s site, not clicking through.

The results have been impressive. Universal interaction rate, the percent of users who purposely enter the frame of an ad continuously for at least 0.5 seconds or more, was up 49 percent.

Universal interaction time, the amount of time users spent on the ad, was up 246 percent, to 9.6 percent. Because of their effectiveness, newspapers can charge a lot more, in some cases 50 percent for a Rising Star ad.

The IAB along with more than 200 executives and industry experts are in the process of trying to improve the metrics of measuring advertising and its effectiveness on the web.

Roberto de Celis of Spain’s Vocento explained how his media group had fared with offering their readers new products. Oferplan.com offers daily coupons which are prominently advertised on the group’s newspaper sites.

Another site they’ve created is guapabox.com which sends beauty samples to women along with a magazine for around 16 euros a month. They’ve harnessed the information they have on their customs from their newspapers and guapabox has a reach of 7 million Spanish women.

Orlando Alvarez, creative director of El Salvador’s Publicidad Comercial Lowe, urged advertisers to be ever more inventive in their attempts to engage viewers. He cited a C&A fashion campaign that linked in to Facebook and played on young women’s desire to be the only one wearing their favorite outfit. When a woman buys a piece of clothing, that piece is then blocked for all her friends on Facebook.

Another campaign by a Guatemalan sneaker store offered huge discounts whenever a registered client entered a rival store – the phone’s GPS system would alert the app. The discounts lasted for a matter of minutes and immediately began to count down, encouraging the shopper to race to Meat Market to get the best discount possible. The key was that the advertising should be engaging and entertaining.