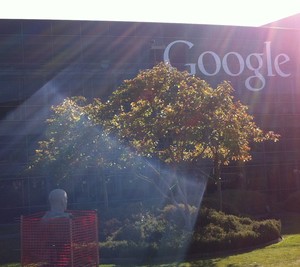 As previous CEO at Salon Media Group, Gingras has a special external perspective and, although never a journalist himself, he is deeply embedded in that world.

Indeed, with all the focus on young talent at Google, it is refreshing to meet someone with a longer CV. He jokes himself of owning “clothes that are older than many of my colleagues at Google.”

So it is worrying when he says, “I don’t think folks have fully grasped how different this media ecosystem is.”

His key observation is that media models are derived from the distribution model in which they sit. As an example he uses a regional Texas newspaper that wanted to follow the business model of the Economist online, treating their online content as a single product, just like the newspaper.

But did this make sense when they also have the most popular sports website in Texas? Should that site be following the same distribution model?

“We owe it to ourselves to rethink every dimension of journalism and how it’s performed,” he says.

Echoing the approach of Circa, Gingras thinks we need new approaches that are more appropriate to the audience, in the same way that radio presenters do not read news articles aloud but adapt the tone, style and content. He also thinks publishers forget that the front page is only the front door for a small percentage of dedicated readers, 75 percent are coming through the side doors, especially if directed by Google.

Asked what he thinks Bezos will do with The Washington Post, he believes the most crucial aspect will be giving them “the culture to innovate.” And that is why he sees Axel Springer and Gawker as good examples to follow. The former for their expansion into other online markets, the latter for their discipline in developing products for the new environment.

For someone who advises against SEO, it perhaps ironic that he gives us an insider tip for well… SEO. Rolling out over the next 6-9 months, a “standout” metatag for publishing partners will ensure credit goes back to original stories and improves their ranking on the page. But he advises to use sparingly no more than once of twice a day. Or else even this SEO will be wasted.

We visited the Google campus in mid-October as part of our Strictly Digital Study Tour to Silicon Valley, and yes, we can confirm it looks exactly as portrayed in the (Google endorsed) film The Internship.