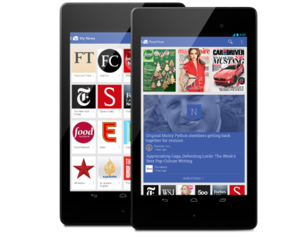 Prominent newspapers such as The New York Times, The Australian, and The Wall Street Journal are all available, as well as high quality magazines including TIME, Rolling Stone, and The Economist. The application also includes a selection of blogs and news sites such as TMZ, The Verge, The Huffington Post, and Reuters. The application automatically generates content based on the user’s preferences and history.

Google’s Currents was its original digital newsstand application. First launched in 2011, it allowed for users to browse and free news sources such as Forbes, The Huffington Post, and ABC News. According to Frederic Lardinois, Currents also allowed publishers to add their websites to the application and add feeds, photos, and social media activity. Currents was launched as a competitor to Flipboard, one of the first digital newsstand apps.

Arguably the biggest difference between the two applications is that with Newsstand, consumers now have the possibility of being able to access paid digital content along with free digital content, something not seen in Google Currents. Users still have to subscribe in order to access sites with paywalls, but they can now do so directly through the Newsstand app.

With Digital First Media’s CEO John Paton‘s announcement earlier this week that all 75 of the company’s dailies would soon have paid digital subscriptions, 41 percent of American daily newspapers will be behind paywalls, according to a recent article by Ken Doctor.

Through Newsstand, not only will existing subscribers be able to access content but also prospective subscribers can register through the application as opposed to having to go to another website. Newsstand also downloads articles automatically, meaning users don’t necessarily need access to the Internet in order to read articles.

In an interview with Mathew Ingram, Google Director of Product Management Scott Dougall indicated that users will be able to import pre-existing accounts with Google Magazine and Currents. Dougall also differentiated the application from Apple’s mobile magazine and newspaper store, telling Ingram that content will “flow into the application from different sources.”

The new application could have major effects on newspapers transitioning from free to paid digital access. In an article on the Venture Beat website, Tom Cheredar speculates: “If Play Newsstand is successful, we could see readers in a position where they’re properly enticed to sign up for a subscription after following the free digital news from a publication.”