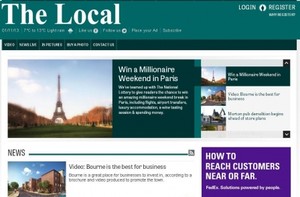 In their announcement, Johnston Press states they are the first in the country to embark on such an experiment, which is set to start at the end of this month. Johnston Press is estimated to already include about 25 percent user-generated content, and as pointed out in a story on the UK’s HoldTheFrontPage website, it seems that if the initiative is a success “it could be rolled out as a model for other small, weekly papers.”

Readers will be able to submit photographs, articles and reviews and may even be able to write stories directly onto the pages of the paper. There will even be free training to teach readers how to upload their pieces from home.

The company has assured that no journalist jobs will be lost and that this initiative is not about cost-cutting. Ashleigh Highfield , the company’s Chief Executive, told the Guardian’s Mark Sweney, “It is not a case that the local newspaper won’t survive if we don’t do this.”

Mark Edwards, Johnston Press Editorial Director for the Midlands and Group Editor of the title, said in the statement announcing the project that it is not meant to detract from what their professional journalists are doing, but rather to allow the paper to “cast our net wider,” hopefully “bringing the local community together, offering them the chance to contribute to the paper the kind of material their friends and family want to read.”

According to the Guardian, the paper could be pushed up from 40 to 48 pages if enough local content is sourced. Johnston Press journalists will oversee the publication of the content added by the public. The project also looks to launch some online pages, a platform until now not used by the paper, with the aim of creating “a more interactive online community.”