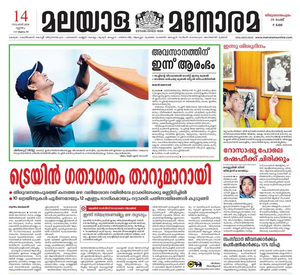 According to the media company the first Diamondspirit-SA press will be installed at its Calicut printing plant, the next two in Kottayam and the last two in Kollam. These will replace single width Manugraph presses.

This is the third phase of the company’s project to move from single width to double width which started back in 2009 and included presses from Manugraph, TKS and now Mitsubishi.

George Jacob says: “The first phase was the order for five lines of Manugraph Smartline presses [editor’s note: October 2009] of which two are under construction, one to start trials next week [second week of November 2013] and the fourth is being installed right now. For the 5th we have issues with the building permits so it is indefinite.

The second phase was the installation of three lines of used TKS 4×2 presses from Japan which are running at our Kochi and Trissur plants.

The final phase (in 2015) will be the second 4×1 press for Calicut plant and two lines for Trivandrum.”

The investment was necessitated, he says, by both capacity and colour constraints. The new machines allow a minimum of 24 pages with 16 pages in colour, scaleable to full colour (from four and eight colour pages earlier). “Before starting the project our installed capacity was 1.7 million copies against a print order of 2 million copies. Our current print order is 2.2 million and growing,” Jacob says.

The first phase of the project included inserting in order to increase the press capacity of only 24 pages. But, as George Jacob says: “We had difficulties in inserting 4-page supplements printed on 42 gsm paper. So from phase 2 onwards (except Trissur plant) the presses have 48 or 40 pages with 32 pages in colour and balloon folders. All the press lines will have new mailroom equipment: For phase 1 and 2 it was Schur Wamac and for phase 3 we are now negotiating with all the vendors.”

This is without doubt a huge investment for Malayala Manorama. George Jacob says: “We believe growth will continue for the next several years at least in the regional language newspapers; Some of the ‘National’ English dailies are stepping into the regional language space. However, this is likely to be one of our last major investments if there is going to be a dip in circulation after some years as per global trends.

We have also just made a significant investment in a web content management system for manorama online which is doing brilliantly in eyeballs but as per the global trends not making enough money on advertising. Our TV channels and radio stations are all self-sufficient. So we are present in all media streams that the latest speeches at IFRA Berlin [World Publishing Expo 2013] were all about; but it is still the newspaper which is the main profit generator.”