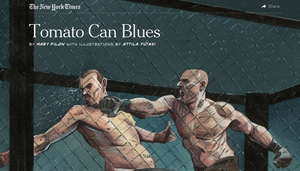 Various recent articles have focussed on how multimedia stories differ from traditional news stories, and question what this tells us about the nature of storytelling in general. Interestingly, many writers emphasise the parallels between fiction and non-fiction storytelling.

Mary Pilon, the NYT writer who recently crafted Tomato Can Blues, a long form multimedia piece about a Michigan cage fighter who faked his own death, told Poynter‘s Chip Scanlan that she thinks “journalists can learn a lot from screenwriters and novelists about how to arc facts.”

Similarly, Adam Westbrook in his recent Twitter feed in which he shared “50 tips for the factual storyteller,” reminds us that “factual storytellers can & should use story design techniques to weave more engaging narratives.”

The crossover between fact and fiction in the way in which a story is recounted indicates that there are basic techniques and methods which are universally more interesting to readers, and these can be used to give both fiction and factual stories greater relevance and appeal.

As Paul Grabowicz says in a Berkeley tutorial post, the “enjoyment of a good narrative” appears to be “hard-wired into the human brain.” And multi-media technologies allow stories to be broken up into segments, which allow readers to explore a story in their own way and to engage personally with what they are reading.

The importance of reader engagement affects the way a story must be told; as Westbrook says “they days of silent audience w/no audience input are over. It was just a blip. We are going back to vaudeville days.”

Mario Garcia agrees, arguing that “engagement is the key, it is essential. Those producing a multimedia piece must be sure to engage all the senses.”

Multimedia news stories allow for multi-sensory engagement with a piece, and give the potential for greater attention to detail with the use of video, audio, image and illustration. Jessica Contrera recently wrote The End of Waffle House for the Indiana Daily Student, and in a post on Poynter, she told Kristen Hare “those little details that some people would just call colour” are the what make readers connect with a story. And with news stories as well as with fiction, an article’s success rests on how well a reader connects with what they are reading.

As Grabowicz states, the Internet does not undermine traditional narrative, but rather provides “an opportunity to experiment with multi-dimensional storytelling and new narrative approaches that provide context and depth and also are more compelling and engaging.”

However, as Garcia reminds us, although the techniques used to relay a story are evolving and becoming more sophisticated, “the two basic questions at the start of the process remain the same as they were decades ago,” and those are asking what the story is about, and what is the best way to tell the story.

In an interview with Adam Perez on the Columbia Visuals website, NYT Senior Producer Nancy Donaldson reiterates this, explaining the importance of playing to the strengths of each medium. She describes how they “approach each project looking at the story first, and then decide the medium.” Multimedia devices must be used to accentuate the story and engage the reader in what is being told, not to distract from the main narrative.

With multimedia news telling comes a change in the way that stories are produced. As Pilon told Poynter‘s Scanlan about Tomato Can Blues, “stories like these are really team projects,” this style of journalism requires much more than a “lone wolf reporter” covering an event.

Multimedia journalism, then, should be seen as an evolution from age-old story telling techniques. The fundamental aim remains the same: to engage and compel the reader with an evocative story.

What multimedia technologies provide is the opportunity to enhance this storytelling in a multi-sensory way; multimedia news stories are textured and intricate, and when done well the various devices employed do not undermine a narrative but do the opposite; to engage and involve the reader with the news being conveyed.