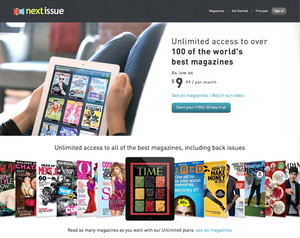 Next Issue Canada was created by Next Issue Media, a publishing conglomerate consisting of Rogers Media and five prominent American publishers: Condé Nast, Hearst, Meredith, News Corp, and Time Inc. The application was created for iPads, Android tablets, and Win8 devices. Its launch was October 15, with Rogers wireless and internet customers getting exclusive access for the first two months. The application will be available to the general public on December 15.

The titles available to users of Next Issue Canada include all publications from Rogers, as well as many prominent U.S. magazines, including Sports Illustrated, Vogue, GQ, and hundreds of other titles. Magazines from outside Canada and the United States will not be available. For a fee of $9.99 per month, users will have unlimited access to monthly publications; for an additional $14.99 per month, customers will be able to see all weekly publications as well. Rogers customers will get their first two months of access for free, while other customers will have their first month without any charges.

As Steve Ladurantaye of The Globe and Mail writes: “Like publishers across North America, Rogers has seen print revenue decline too rapidly for digital revenue to catch up.”

While the idea of an unlimited supply of digital content is appealing, Navneet Alang of The Globe and Mail writes that the new application is not a long-term solution to generating revenue: “But Netflix also succeeds because, while it has thousands of titles in its overall catalogue, its algorithms excel at filtering through the glut to tailor a selection for your taste.” Alang goes on to explain that the quandary of the modern news consumer is not that there is not enough content out there; it is that there is too much.

Mathew Ingram notes that the way people consume their digital content is changing as well, that the modern consumer, “wants more than any single magazine can provide.” Ingram goes on to say, “The model that appeals far more to me is the Flipboard or Zite or News.me approach, where magazine content from a range of different titles is streamed into the app along with content from other sources such as Twitter, Facebook, RSS feeds and so on.”

Rogers Media is clearly investing in the fact that there are still consumers out there who relish having unlimited digital content at their fingertips. The company has not yet indicated if it will create a similar application for smartphones.