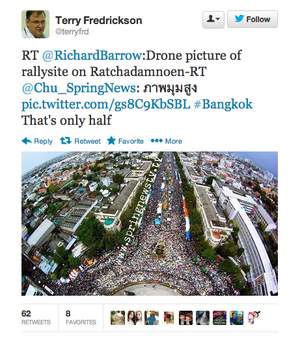 We reported earlier this that week the U.S. Federal Aviation Administration is considering allowing reporters to use drones, subject to restrictions. While many Western countries face strict regulations on reporting with drones, newspapers in Thailand covering last weekend’s protest have largely embraced use of these small helicopters to capture images.

Large political protests have been sweeping Thailand for many years. A protest that occurred on Sunday was the largest since the 2010 unrest began – when masses of protestors crowded the streets and 91 people were killed. On Sunday, as many as 100,000 protestors took to the streets of Bangkok to demand the dismissal of the former Prime Minister Thaksin Shinawatra’s sister from office.

Newley Purnell noted in Quartz that the protest presented a surprising innovation: the use of drone journalism to capture the size of the crowds. In rallies it is often difficult to determine the number of protestors involved – but reporters using drones posted images to Twitter in efforts to calculate the size of the rally.

The country’s newspapers are largely embracing the photos captured by drones. The Nation and The Bangkok Post began publishing the aerial panoramic photos of demonstrators – and are enthusiastic about the new perspective drones offer since they were able to produce clear pictures that showed the actual size of the crowd of protestors.

What is surprising is the widespread use of drones in Thailand, since many Western news organizations are still encountering resistance when they want to deploy drones. Thailand is not known for digital innovation in media and its reporting standards have been seen as lagging behind those of international media, according to Purnell.

Reporters Without Borders ranks Thailand 135 out of 179 on its 2013 World Press Freedom Index. Thailand has been ranked so poorly due to the government restrictions on the Internet and the laws making it illegal to insult the king or royal family.

Thailand ranks behind Zimbabwe, Libya and Angola in press freedom, but reporters are flying drones in Thailand with no opposition from the government. Thus this surprising acceptance of reporting with small, camera-equipped helicopters in Bangkok shows how Western countries could potentially fall behind with their failure to embrace drone journalism.