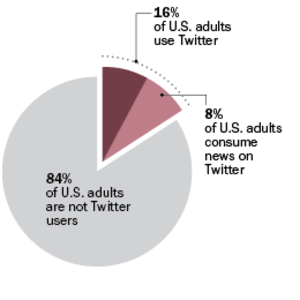 Nearly one in 10 U.S. adults get news through Twitter, and they are younger, more mobile and more educated, according to a new report.

According to a survey of more than 5,000 adults, 736 Twitter users and 3,268 Facebook users, roughly half of the 16 percent of Americans using Twitter state they rely on the social media site for their news. News being defined as, “information about events and issues that involve more than just your friends or family.”

This report comes at a time when Twitter is preparing for its initial public offering, within the week, and as more people are turning to social media as a source for news. The report follows a similar survey on news via social media that found that 30 percent of Americans get some of their news on Facebook.

Twitter news consumers are also more likely to be educated with 40 percent of their news-seeking audience having at least a bachelor’s degree, compared with 29 percent of the total population and 30 percent of Facebook.

Along with the survey, the Pew Research Center analyzed Twitter conversations of 10 major news events ranging from the Newton, Connecticut school shooting to the Supreme Court hearings on same-sex marriage. From this analysis three common themes emerged: much of what is posted focuses on passing along breaking news as it develops; Twitter conversations switch topic and sentiment quickly; and the conversations are not necessarily an indicator of the public opinion.

For example, even with the outraged response on Twitter after the acquittal of George Zimmerman in the death of teenager Trayvon Martin, the largest component of the Twitter conversation (39 percent) shared the news without offering an opinion.