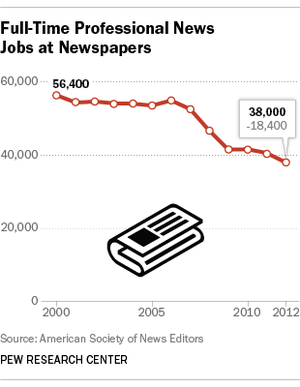 For example, in the United States, the newly elected City Council of Flint, Michigan, includes a convicted killer, another man who served probation for felonious assault and two people who have gone through personal bankruptcies. The newly elected councilman states that he has never hid the fact that he served 19 years in prison for the murder of a man; it was just never reported by the media.

The Flint Journal reported the newly found information onWantwaz Davis’ criminal record this Wednesday, a day after the polls closed for voters. “We owed you more,” Flint Journal Editor Marjory Raymer wrote in an apology letter to readers.

Council President Scott Kincaid told Dominic Adams of The Flint Journal, “The council people are elected. They’re going to get sworn in on Monday. Nothing you write about it is going to change it now.”

In 2009, Advance Publications reduced The Flint Journal’s print publishing to three days a week, along with a planned layoff of 35 percent of its employees. MLive.com an online publication was meant to pick up the slack.

A steep drop in ad spending has cut profits at U.S. newspapers sharply; many local daily papers are in bankruptcy, some are printing fewer papers and several have closed altogether. A recent Pew study showed that newsroom employment fell below 40,000 full-time workers for the first time since 1978.

Many local dailies have been reduced or cut entirely due to economic issues. Others in just the general area of Flint include The Ann Arbor News, which cut back its printed editions to Thursdays and Sundays in 2009 and hired a fraction of its former staff to run the website AnnArbor.com. And the nearby Detroit News, which began delivering its paper to subscribers on Thursdays and Fridays only, although it prints papers every day.

The diminished capability to gather the news, and its impact, was noted in the State of the News Media report which found that 31 percent of those surveyed said they had abandoned a particular news outlet because it now longer provided the news and information they had grown accustomed to.

When a convicted felon is appointed office without the public being properly informed on the matter beforehand a new effect is made clear: how the newspaper failed its readers. Newspapers have the responsibility to inform the public on important matters and the reduction in newsrooms, especially local newsrooms, is making that increasingly difficult.