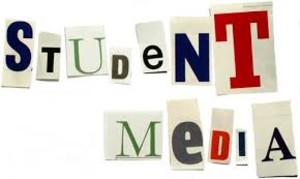 In some cases, the decision has already been made. The Lance, an 85-year-old student newspaper at the University of Windsor in Canada, permanently shut down its presses earlier this year. Other newspapers have drastically cut circulation, with some cutting half or more of their issues.

Like their non-campus counterparts, university newspapers have been forced to find innovative solutions to keep the hallowed institution of campus reporting financially viable. Cutting the number of print issues is a start. As the Pew Research Center writes, there are other options, too.

One is to find new revenue streams within the university itself. This can mean having the student body contribute in some capacity, whether it is a small additional fee on tuition (at The Daily Illini at the University of Illinois in the U.S., this amounted to $1.85 per student per semester according to a report in The New York Times in late October), or hosting student fundraisers and events. It can also mean adding special sections to the print editions, such as housing or nightlife, that would attract more advertisers.

Another alternative is to embrace the digital-first strategy and reinvest funds in online content. As the Pew Research Center indicates, American adults ages 18 to 24 account for 10 percent of the population, yet just 6 percent of total newspaper readership. Three quarters of readership is comprised of those above age 45.

As with their non-campus counterparts, embracing a digital-first strategy does not mean abandoning print media. While some campus newspapers have shut down, students at many schools still read their college newspapers and prefer print to getting their news online, The Washington Times writes. Rather, it means reallocating the time and monetary investment into online and mobile content. Many universities have begun this initiative, cutting circulations and refocusing the mandates for print editions they do produce.

The University of Oregon’s Daily Emerald is one of the best examples of this transformation. The 92-year-old paper not only altered its print strategy, it rebranded itself as the Emerald Media Group. It realised that continuing their print issues, even if reduced (the paper went from five issues per week to two), would make sense.

The print editions saw their mandates change; the Monday issue now focuses on campus news and the weekend sports wrap; the Friday issue’s mandate is features, enterainment, and sports. Breaking news is now delivered only online, and the group has added more blogs to its website.

Despite being in its best financial shape in more than a decade, the group knew that innovation was necessary. The reasons it cites are that they want to better serve their audience, better prepare their staff for employment, free up more resources for their digital content, and to streamline their content.

George Mason University’s The Fourth Estate is another innovative student news source. According to The New York Times, the initative was bred out of a rivalry between the school’s official student newspaper Broadside and Connect2Mason, a digital news site created by a student. The two merged under the new name. The result: better coverage of student events, and an increased online presence. Penn State’s Onward State is another example of a prominent digital, student-led journalism initiative.

Newspapers can also expand their editorial footprints to cover activities and events outside the university. With 41 percent of American newspapers behind paywalls, campus newspapers have the potential to be a free, fairly credible alternative to paid subscriptions, so long as they provide legitimate coverage. Theoretically, the broader the scope of reporting, the more readers it will attract. For readers tired of paying for subscriptions, campus newspapers could become their primary news source, particularly in smaller communities.

Another option is to start charging the public to access online content. In theory, it seems like a practice destined for failure — a college newspaper, written by students begging for exposure, and an audience that is unwilling to pay for The Wall Street Journal, let alone a newspaper written by 20-year-olds. And yet, that’s exactly what The Daily O’Collegian (Oklahoma State University) did. And it worked.

According to Alexa Capeloto of the USC Annenberg School for Communication and Journalism, the paper’s goal was 100 subscribers when an initiative with Press+ was launched in 2011. A year later, the goal was exceeded by 77 percent, enough that General Manager Ray Catalino raised the subscription fee from $10 to $15 for new users.

“It’s very simple to implement; it’s basically a technical change, and the money comes in. And as long as you’re providing good content, it continues. So it has very little cost, has a nice upside and very little downside, in my opinion,” Catalino said in the interview with Capeloto.

Since the successful initiative, more than 50 campus newspapers have signed up with Press+.

These examples show how student newspapers are attempting to adapt to changing consumer culture and the digital landscape. Where university newspapers have a major advantage over non-campus print publications is that they are not necessarily expected to generate a profit.

These papers exist mainly as a service to students; however, there is still the need to adapt to better serve both the future journalists writing for these publications and the students reading them. With the innovations and new methods being implemented, these vital publications will continue being relevant and to fulfilling their roles.