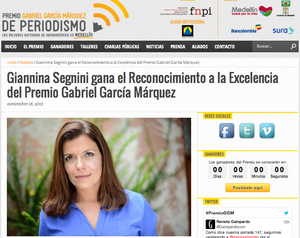 After breakthrough investigative pieces driven by a revolutionary technological approach, Segini was declared a winner of the Gabriel García Márquez Prize for Journalism. The prize, “one of the highest distinctions a Latin American journalist can hope to receive,” according to the Costa Rica Star was awarded to the reporter last month.

Segnini, a writer for La Nacion, is also the founder of the newspaper’s investigative unit. Earlier this year she, along with her team of journalists and researchers, uncovered an international web of bribery and corruption that led back to two of the former presidents of Costa Rica.

“The Finnish Project” recounts the events where those presidents took a Finnish corporation’s money in order to push laws that to their benefit through congress.

Segnini told ICIJ, “We proved that the representative of the Finnish company in Costa Rica gave a house, as a bribe, to the president of the Costa Rican Public Health Institution (CCSS), Eliseo Vargas. He had promoted, as a congressman, a law that made possible the ‘Finnish Project’.”

“The biggest criminals write laws that make their crimes legal,” she added.

This story led to a governmental investigation into the habits of the two officials, which left more of a cautionary tale than retribution.

Jaime Lopez of the Costa Rica Star said, “In the end, the disgraced former Presidents barely spent a night in jail, but government officials in Costa Rica realized that investigative journalists like Ms. Segnini and her team at La Nacion are watching and ready to get some good muckraking done for the benefit of the people.”

Segnini’s second project, partnered with the International Consortium of Investigative Journalists (ICIJ), focused on a series of leaks documenting off-shore companies taking shelter in “tax havens.” According to The Knight Center for Journalism in the Americas, the group has project put together what they call “the most ambitious cross-border investigative project in history.”

The Knight Center said the outcome of the project was “a giant interactive database that can produce visualizations of the connections between more than 100,000 companies and secret trusts with their members, clients, accountants, attorneys, and shareholders throughout the world.”

This, Segnini believes, is why investigative journalism is still essential to news organizations and democracies. But with the media market constantly streamlining, she fears that businesses are trying to edge out investigative reports.

According to El Paîs, in her acceptance speech, Segnini emphasised the importance of technology in journalism, saying that will be the factor that makes the difference in the future of investigative journalism. She explained that currently, journalists are often years behind scientists on what is the up-and-coming technology.

“The good news is we have time to reverse that gap if we dare to experiment,” she said.

Segnini drew these lessons from her own career, as she used cutting-edge researching practices to uncover her “Finnish Project” story.

Embracing technology is Segnini’s first step into taking investigative journalism into a successful future. She also believes that this goal is attainable to journalists everywhere.

“The great thing about technology is that there is no need to make big investments to make a change,” she told the Knight Center. “There is an enormous quantity of open source tools. The Internet has democratized access to them and we can find creative ways to make these types of analysis from anywhere in the world.”

While the award for “Excellence in Journalism” is the most esteemed, four other journalists also received Gabriel García Márquez Journalism Awards. Alejandro Almazán won the award for Long-Form Reporting, Esteban Felix for Photojournalism, Lucio Castro for News Coverage, and Olga Lucía Lozano and her team for Innovation.