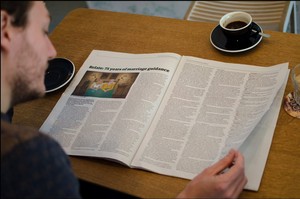 Longer articles need a dedicated reader who has time to sit down – maybe with a cup of coffee and a newspaper in his hands rather than a screen before his eyes.

A few years ago, the Guardian started experimenting with long-form journalism. The idea was to give articles exposure beyond the day of publication and to present a selection of good stories to interested readers. “We tried long articles in various mediums: screen, kindle, mobile and also print – which felt like a good fit,” Dan Catt said. He also thinks that news organisations are normally expected to innovate and explore new ideas in digital but this does not always seem to be the case in print – a plus for the Guardian.

Jemima Kiss described how it all developed, not as a planned project but more in a trial-and-error mode: “We had a chat, did a thing, and then we had another chat and did another thing. It’s quite challenging to work like that within a large organisation because there are expectations imposed internally and externally about processes and the way in which a big organisation should work. But if you ignore all that and just focus on doing interesting things and following your nose, you end up coming up with some interesting things.”

What helps is the openness of the Guardian API, Catt says, which allows for the  repurpose of content (published as full body text including metadata). “It allows us to experiment both internally and externally with different ideas. The Guardian publishes about 450-500 items a day, and we wanted to see if we could surface some of the more interesting ones,” he said.

The outcome was a 24-page weekly tabloid print product that contains 10 to 12 Guardian stories of the previous week, all of a certain length (average of two pages). The stories are collected automatically by algorithms programmed in the Guardian API which allows the content to be filtered and repurposed according to specified criteria, one of them being word count. Other criteria are for example the number of views, shares on Twitter and Facebook, the number of comments and many more. Essentially the stories are filtered based on the readers’ behaviour. The pool of stories to select from is commissioned and created by the editors and writers.

Catt explains: “The algorithms are both easy and complex… in that it just takes a lot of time playing with the data to get a good feel for it. One of my remits when I worked for the Guardian was to try and understand how people read the news, how editors produced the content and the flow of both the stories and data of those stories within the organisation and the Internet. So it’s taking an understanding of all that, and trying to boil it down to simple algorithms.”

The final selection of stories is done by newroom staff and the results are transferred to a software tool called ARTHR, which handles the layout that is then fine-tuned by hand in the newsroom.

For production, the Guardian partners with The Newspaper Club, a company that offers a service to everyone to create and print their own newspaper. The first few issues were printed on a traditional offset, the last few were digital. The circulation is around 500 copies per issue.

The printed newspaper is distributed to The Guardian’s own coffee shop in East London, called #guardiancoffee, where it is offered free of charge to the clients.

Says Kiss, “We didn’t want to start with a business concept as it can limit the format of what you want to do, and also make you less imaginative because you start working to assumptions that aren’t necessarily correct about what a reader or sponsor will or won’t pay for and what they expect. This incarnation of the Long Good Read is free for the whole of its 12-week run. It may well be that eventually we find a sponsor, but we just want to focus on the idea, the content and the format initially. We’ll be doing another six-week run after Christmas, and beyond that, who knows! We are thinking about distributing to other independent coffee shops too.”