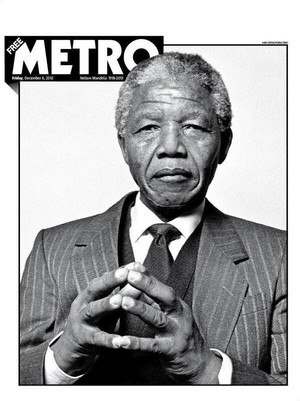 The announcement came in time for many newspapers to remake their entire front-pages with preplanned photographs of the celebrated leader.

The Week’s Peter Weber complied a list of the world’s front-pages today stating: “In many ways, the front pages of newspapers and covers of magazines are our most enduring public memorials to world leaders and global celebrities.”

The Washington Post ran the headline, ‘A nation’s healer is dead,’ The Scotsman reads, ‘A light goes out as Mandela dies at 95,’ while in his homeland of South Africa the Sowetan front-page says, ‘Goodbye Tata.’ The Los Angeles Times ran a photo of Mandela in prison with the headline, “A life dedicated to liberty,” and the Independent chose to place the leaders own words: “To be free is not merely to cast off one’s chains, but to live in a way that respects and enhances the freedom of others” on its front-page. Other news outlets, such as the Metro, felt no words were necessary and simply ran a portrait of the celebrated leader on its front-page.

The New Yorker has released a preview of its next cover, a tribute to Mandela by the artist Kadir Nelson. “I settled on a younger image of him during the time that he was on trail with over a hundred of his comrades,” said Nelson in The New Yorker on the choice of the photo. “I wanted to make a simple and bold statement about Mandela and his life as a freedom fighter.”

BuzzFeed has also complied a collection of newspaper front pages that paid tribute to the anti-apartheid leader today – noting how quickly front page tributes appeared after the news broke.

Peter Brookes, a cartoonist for The Times, drew a heartfelt cartoon of Mandela.

The New York Times late last night scraped all other articles aside to place a simple portrait of Mandela in the centre of its front-page above the fold with the headline: “South Africa’s Conqueror of Apartheid as Fighter, Prisoner, President and Symbol.”

Mandela, who had not appeared publicly since the 2010 World Cup, had become increasingly frail in the past year and had been in and out of the hospital, according to Times Live.

Newspapers had long planned how they would pay tribute to the renowned leader. Bill Keller’s obituary in The New York Times on the former president is a nine-page saga on the greatly esteemed man.

The Daily Telegraph has placed a seven-part obituary on its website. The Guardian has created an interactive timeline from its archives in which you can read coverage following the leader through the years.

“Although we knew that this day would come, nothing can diminish our sense of profound and enduring loss,” said Zuma.

Today newspapers around the world have echoed that sentiment.