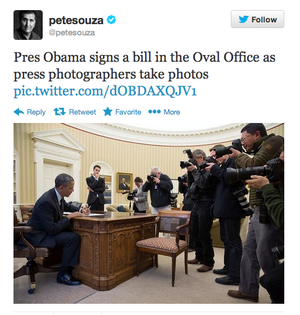 The reporters felt that they were being purposely barred from events that had been open for the press in previous administrations, in order to control the way the president is portrayed.

According to The Guardian, the letter said, “Journalists are routinely being denied the right to photograph or videotape the president while he is performing his official duties. As surely as if they were placing a hand over a journalist’s camera lens, officials in this administration are blocking the public from having an independent view of important functions of the executive branch of government.”

After the protest letter was sent, USA Today became the most recent outlet to state it will go without the images.

Many journalists complain that only Pete Souza, Obama’s chief photographer is able to capture newsworthy moments with the president.

But according to Mike Davis of TIME, this trend is nothing new. He states that as a White House staff photographer under the Bush administration, they often only took positive photos of the president, and often at times when civilian journalists were not allowed access.

Other reporters believe that the situation with the Obama administration is different, especially given their penchant for social media. The White House frequently posts pictures to its Twitter and flickr accounts, covering presidential events that journalists were not given access to. In this way, the president controls all images of himself.

“The news organisations ran these (White House) images daily and no doubt enjoyed the fact that they were free,” he said. “But there was a dirty little secret that no one wanted to face up to: This was carefully edited propaganda.”

News organisations addressed this point in their letter to the White House according to The New York Times, saying, “You are, in effect, replacing independent journalism with visual press releases.”

This, journalists say, is what finally brought them to boycott the images altogether.  They feel that publishing the released photos would mean supporting the photos and excusing the administration’s actions.

In response to the letter, journalists were invited into the Oval Office to photograph Obama signing a bill, but this turned into an even bigger controversy after Souza took a picture of the reporters and posted it to Twitter as “White House Photo of the Day.”

According to The New York Times, White House Spokesman Josh Earnest defended the new policy, saying, “We’ve taken advantage of new technology to give the American public even greater access to behind-the-scenes footage or photographs of the president doing his job.”

Journalists covering the White House are still trying to determine what the role social media will play in their careers. While still working to get access to the president’s office, most reporters recognise the importance of Souza’s role.

David Hume Kennerly, official photographer for President Gerald Ford, told The New York Times, “Everybody is trying to come to terms with the impact of social media. I don’t know what the right balance is, but I understand his position in terms of the historical record.”