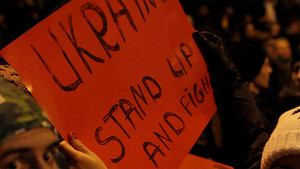 In an attempt to stifle the turbulent protest, riot police used violence against protestors and journalists alike, the latest in a series of the country’s actions to restrain the free press.

On 4 December, WAN-IFRA and the World Editors Forum launched a protest campaign against President Yanukovych, in reaction to the “horrific images and detailed accounts WAN-IFRA has received from independent, verified sources in Ukraine over the last 48 hours.”

When the protests broke out Saturday, riot police violently ousted protestors from a public square, using nightsticks, flash grenades and tear gas. The next day, protestors came back in stronger numbers, this time protesting more than the EU decision.

According to CPJ, over the course of the weekend, at least 51 reporters were injured at the protests. Some were caught in the fray and hit by rocks that protestors threw, while others state that riot police targeted them specifically.

CPJ also reports that Maryana Zakusilo of Telekritika said that at the time of the protests, police attacked journalists even though they had press badges and wore vests marked “Press.”

Rianovosti reported that award-winning Ukrainian journalist Denys Danko told The Kiev Post, “Every officer running by me hit me with a club. I was hit 30 times altogether. They kicked me in the head, chest, hands.”

Shortly after the events, Dunja Mijatovic, the Representative on Freedom of the Media for the Organization for Security and Co-Operation in Europe (OSCE) released a statement condemning the actions of the riot police and the violence against journalists.

“I am especially concerned that in most of the cases, the beatings were reportedly conducted by the law enforcement officers who attacked the journalists and disregarded their press identification,” she wrote in a letter to Ukrainian Foreign Minister Leonid Kozhara. “Violence against journalists cannot be tolerated.”

This violence is just the latest in a trend of censorship in the Ukraine. According to GlobalPost, the nation’s government is behind a series of cyber attacks on journalists, in an effort to increase censorship before the upcoming election season. This process looks to defame journalists who could cause damage to the president’s campaign, and enforce a “blacklist” of forbidden topics.

The site also says that hackers got access into one journalist’s computer “after she clicked on a link infected with malware in an email from what appeared to be the Interior Ministry notifying her of criminal proceedings.”

Last summer also came with a streak of violence against journalists. Some reporters felt that government officials targeted them after writing pieces that were critical of the administration.

According to IFEX, Oleg Bogdanov, a journalist who wrote articles criticizing the traffic police, faced “increasing threats” from anonymous sources. Later, he was attacked physically, resulting in a broken jaw, nose and a concussion.

The recent protests show that the population of the Ukraine is against this trend of violence. According to Reuters, one protestor said, “After Saturday, when the protest was broken up, I thought I should come today to defend our rights. We are no longer talking about ‘euro-integration’, but our rights.”

This post was updated on 4 December to include information about the launch of the protest campaign.