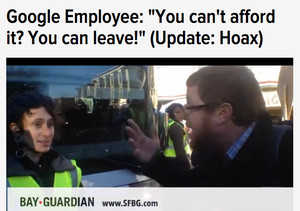 A number of false stories have made a big splash recently, including a Twitter tale of a Thanksgiving Day dispute on a plane, a heart-wrenching story of a woman drowning in poverty, a Google employee telling protestors to go to a city they can afford, and a child’s sweet but slightly odd letter to Santa.

Ravi Somaiya and Leslie Kaufman, in an article for The New York Times, pointed out that although truth has never been a key component of viral content on the Internet – digital news sites are now publishing these fictional stories and saying it is all part of the new business of journalism.

Most of these stories are a kind of online fiction or as one author chose to specify “performance art,” – which is all in good fun, until major news organizations like The Huffington Post publish them as reality (it published the Twitter hoax, the poverty essay and the letter to Santa). The New York Times even published the Twitter hoax in its travel section blog before it was discovered to be fake.

The “Twitter prank,” as Elan Gale – the inventor of the feud – likes to call it, received 5.6 million views in total, according to The New York Times; and the essay on poverty which turned out to be impressionistic rather than factual, prompted more than $60,000 in donations to the author Linda Walther Tirado.

In a time where publishing online news content is literally a race into who can break the next biggest stories many organizations have adopted a mentality of publish first, check later.

As Nieman Journalism Lab’s Josh Benton told The New York Times, “You are seeing news organizations say, ‘If it is happening on the Internet that’s our beat,’ ” he said. “The next step of figuring out whether it happened in real life is up to someone else.”

When these websites publish unverified reports, those articles are sometimes so shocking and emotional, such as the poverty essay, that they draw thousands of readers. Then, when they publish stories saying they were hoaxes it draws even more readers – BuzzFeed’s follow up story on the Twitter hoax drew more than 400,000 views. As Ryan Grim, the Washington bureau chief for the Huffington Post, told The New York Times, “The incentives are all wrong.”

Many new organizations blame the increased frequency of reporting false information on the need to act quickly in a hyperconnected age. “The faster metabolism puts people who fact-check at a disadvantage,” said Grim.

When Gale finally revealed the entire story was a hoax, many wondered why he let people believe it for so long.

Mathew Ingram, in an article for Gigaom, stated that he believed it was Gale’s responsibility to correct media outlets saying, “I would argue (and did argue during my Twitter debate with Gale) that since each of us is effectively a member of the media now, whether we like it or not, it’s incumbent on the sources of such erroneous reports to point out that they are engaging in fiction.”

But Gale did not agree and stated it wasn’t his job to correct the media, he responded to Ingram in a tweet stating: “No one was harmed. No one was injured or insulted. News orgs embarrassed themselves. I don’t need to stop my day for that.”

Gale also told The New York Times: “It’s the people who reported it who are deceiving their audience.”

Zach Poitras, the comedian behind the fake letter to Santa, had no intention of fooling anyone into thinking it was real. Poitras told The New York Times that he wrote that letter two-years ago as a joke and began calling the websites as soon as he realised his letter was being falsely portrayed.

“No one called me,” he told The New York Times. “They waited for the facts to come to them to correct.”

Medium recently published an article in Inside Matter called “Why facts matter,” which basically said that the people behind Matter check facts as if their lives depended on it because, in a way, they do. “Checking facts is important, because facts are important,” writes Matter co-founder Bobbie Johnson.

“This isn’t easy, and it takes time,” he said. “Sometimes fact-checks can take the guts out of a story. That means you kill the story, or you change it: you don’t absolve yourself from blame just by deciding that not checking is easier.”

“And the thing is, if we behave like facts don’t matter, then one day they won’t,” Johnson said.