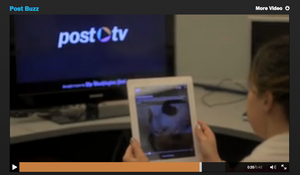 In a brief video on the Post website, the newspaper demonstrates how easily users will be able to access PostTV and watch it on their televisions.

The process is simple; users plug Chromecast — a USB flashdrive-like device, which retails for $35 — into the back of their televisions, connect to their WiFi, and then choose which media to play.

This summer, on the same day as Google’s launch, The Washington Post announced that it would be the first news provider to partner with Chromecast. The paper, having launched its own PostTV around the same time, wanted to integrate its new product with the new device.

In an article on the paper’s website when the annoucement was made in late July, Senior Editor of Video Andrew Pergam stated: “Our use of Google’s new technology is another example of our continued innovation in video distribution. As we start to launch new, original PostTV programming, we are excited to offer users more options for viewing our journalism and were pleased to work with Google engineers on this project.”

More recently, Pergram, in an interview with Lost Remote’s Jordan Chariton, said: “This adds a whole new dimension to watching Washington Post video, since it allows users to sit back and watch on their TV at home. You’re able to watch our video and control it just as easily as you would anything else — and you’re able to turn your computer or tablet into, essentially, a remote control. We think that’s a really cool part of watching video in the future, and we’re pleased we can be the first news site to do it.”