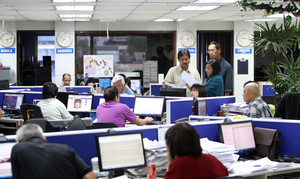 Gunnar Springfeldt: Why not wait for the investigation to be completed before writing the story?

“Our resource person said that he feared the tremendous pressure from some of the country’s most powerful people may be brought to bear on the NBI, and consequently could lead to a whitewash. The story had to be out to pre-empt the high and mighty involved in the scam from messing up the NBI probe. ‘This is for country,’ the NBI man said, matter-of-factly.”

GS: Why The Inquirer?

“The agent was entrusting us with the story because The Inquirer has the track record of credibility, fearlessness and fairness. He didn’t say that but, I being Inquirer proud, presumed he meant to say it.

“LJM continued to meet with the source either in The Inquirer office in Makati City in Metro Manila or secretly. Other editorial teams were involved, but asked to keep the information confidential. A lot of documentation was handed over to The Inquirer and it was not an easy task to make sense of it.

“I allowed a month for all the information that I gathered to percolate. I went on leave. Finally, I informed The Inquirer President, Sandy Prieto Romualdez, who has respected and trusted the Editorial Group’s judgment all this time. After final consultations with Nancy and her NBI news sources, I made an outline and decided to publish. Aside from the voluminous documentation, my decision was based on my instincts and gut feel. I sensed the deep sincerity of the NBI agent and the truth in the revelations of the whistle-blowers. And most of all, I prayed for guidance.”

In the follow-up article the next day, Janet Lim-Napoles denied all allegations. And after a couple of weeks she even met with the editors of The Inquirer to discuss the story. The meeting was videotaped and can be found at the special pork barrel coverage section of The Inquirer website.

The Inquirer published the scandal as a six-part series, complete with explanatory sidebars, “Fast Facts,” and graphics – particularly a flowchart tracing the movement of the ‘pork’ from the proposed projects the concerned legislators identified and wanted funded, to their handpicked implementing government agencies – but notably in this case, bogus non-government organisations (NGOs).

The ‘pork barrel’ practice in the Philippines is handled officially through a fund called the Priority Development Assistance Fund (PDAF), while the system – inviting as it is to corruption – is now being questioned by many, even though the judicial process will take years. After fearing for her life, Janet Lim-Napoles approached the president Benigno Acquino at the end of August to turn herself in. The political and legal aftermath involves whether PDAF is constitutional, and a Senate hearing has been held with Ms Lim-Napoles.

LJM explains why the public reaction has been so strong:

“For the first time in the notorious history of the so- called ‘pork barrel’ in the Philippines, The Inquirer series of exposés detailed exactly how and where the wholesale robbery of the people’s money was done (through NGOs), for how long it was going on (10 years), how much was involved (P10 billion), and who did it. The last is a veritable Who’s Who in Philippine politics.”

The reporting of the ‘pork barrel’ scam shows that investigative reporting is working in the Philippines and that press freedom is – in word at least – secured by the constitution. The Philippines is one of only two countries in Asia labeled as ‘free’ when it comes to the Internet and “partly free” for press freedom by US-based organisation Freedom House.

At the same time, the Philippines is a very contradictory media market and it is still far behind in the Press Freedom Index, published yearly by Reporters without Borders. 147th out of a total of 179 countries.

Provincial journalism in the country is dangerous, for some a deadly job. Impunity is a major worry, and there are terrible working conditions for local journalists who are subject to constant threats from local crime syndicates. Since 1992, no fewer than 73 journalists have been murdered, according to the Committee for Protection of Journalists (CPJ).

Often, paid assassins are behind the killings, but in 2009 over 30 journalists were massacred in the Maguindanao province. Widespread corruption means these cases are yet to be investigated.

I asked LJM what the authorities are doing about the impunity situation.

The Philippine Daily Inquirer has the highest share of newspaper readership in the Philippines, according to Nielsen Co. It was founded in 1985 during the last days of the regime of Ferdinand Marcos. The newspaper has since been subject to political pressures. Sandy Prieto Romualdez, the publication’s CEO, made a presentation at the WAN-IFRA World Newspaper Congress in Bangkok in 2013 about how the organisation handled a sudden and extensive advertising boycott in 1999 following publication of how the president’s sons misused a government jet.

Gunnar Springfeldt is a consultant in his own company, Springfeldt Media. Earlier this year he left his position as VP of Development at the Stampen Media Group in Sweden. His background is in journalism and primarily he was a business reporter at Göteborgs-Posten. Gunnar has been a member of both WAN-IFRA’s Advisory Council and the European Committee. He is now taking active part in a new Free Speech initiative that is developed around Gothenburg University in Sweden.