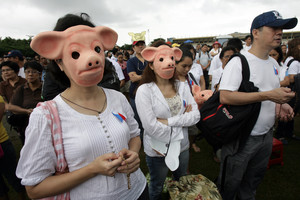 The Philippines has had its fair share of weather-related disasters. The devastating typhoon Haiyan, or Yolanda as it is called locally, is one of more than 20 storms to have hit the shores of the 100-million inhabited island nation. In addition, a serious earthquake killed hundreds of people, while a ferry disaster in the provincial town of Cebu recently contributed to the death toll.

Nonetheless, until Haiyan, another story has dominated the Filipino news flow this year: the “pork barrel” scandal. The leading Manila daily, The Philippine Daily Inquirer, is responsible for breaking this news story that will change the country forever, and that has seen tens of thousands of Filipinos take to the streets.

This is a story about how brave editors choose to publish.

In early May of this year, Nancy Carvajal, the Inquirer reporter assigned to cover the National Bureau of Investigation (NBI – the Philippine equivalent of the FBI), asked to meet with a representative of the task force that rescued Benhur Luy, a man who had been detained for a number of months by his employer, Janet Lim-Napoles.

It was impossible for her to know that Luy had a shocking story to tell the NBI. It was to become the biggest scoop ever for The Inquirer and a story that shocked an entire nation. Tens of thousands of Filipinos took to the streets. The continued reporting of the legal and political process has been breaking news more or less daily in the Philippines. The number of page views at The Inquirer website increased by 42 percent, while unique visitors rose by over 30 percent.

The story broke on Friday, 12 July 2013. Nancy Carvajal’s opening passages sum-up very well what the scandal is all about:

“The National Bureau of Investigation is looking into allegations that the government has been defrauded of some 10 billion pesos (about 170 million Euros) over the past 10 years by a syndicate using funds from the ‘pork barrel’ of lawmakers and various government agencies for scores of ghost projects.

“Described by an NBI investigator as the ‘mother of all scams,’ the con game came to light in March following the kidnapping – and subsequent rescue – of an employee of a trading company, JLN Corp., which was purportedly behind the scheme, according to sworn affidavits and interviews conducted by The Inquirer.”

“The center of attention is the owner and leader of JLN Corp, Janet Lim Napoles, a woman well known in the Manila jet-set crowd and very well connected in the political and the financial community. According to the allegations, Napoles had set up about 20 fake NGOs that were recipients of so-called ‘pork barrel’ funds – tax payers’ money that is given to Filipino congress politicians for funding needed local development projects in their own constituencies. She has denied the allegations.

“Napoles’ alleged role was to perform money laundering within her corporation so that the tax payers’ money could be directed to people it was not intended for, not least some politicians themselves.”

Letty Jimenez-Magsanoc, also known as LJM, is the editor-in-chief of The Inquirer. She made the decision to publish after two months of deliberations. The Inquirer’s investigative team and other reporters were involved in the fact checking and editorial planning processes.

This is LJM’s own story about the editorial process:

“In May I agreed to meet with the NBI man. Nancy Carvajal outlined to me what he was going to tell me, most of which was hard to believe. While talking to me late at night in the office, he nearly broke down. He was overcome by the massive plunder and corruption perpetrated by VIPs in government. Or, was he scared silly of the explosive information that he had at hand with notarized affidavits, not only from Benhur Luy but from at least six others who had been made presidents of the fake NGOs set up by Napoles as depositories of legislators’ ‘pork’?

“The source said that the justice department had ordered the NBI to investigate the shocker which had been accidentally uncovered after the rescue of Benhur Luy”.

In an interview with LJM, I wanted to probe more into the story behind publication…

Gunnar Springfeldt is a consultant in his own company, Springfeldt Media. Earlier this year he left his position as VP of Development at the Stampen Media Group in Sweden. His background is in journalism and primarily he was a business reporter at Göteborgs-Posten. Gunnar has been a member of both WAN-IFRA’s Advisory Council and the European Committee. He is now taking active part in a new Free Speech initiative that is developed around Gothenburg University in Sweden.