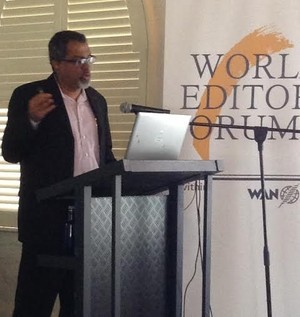 Carrying editorial content sponsored by advertisers on digital platforms is still a divisive newsroom issue, despite news brands of high integrity, like The New York Times and BBC.com, opening their sites to this form of advertising.

In South Africa this week, during events around a Future of News colloquium, co-sponsored by Wits University and the World Editors Forum, journalists expressed their discomfort at the growing acceptance by news titles to take revenue for content – that appeared to be journalism – but which was not produced by their own newsroom. This sentiment was echoed by Wits University’s Caxton Professor of Journalism, Anton Harber in a newspaper column on the subject and David Boardman, the new Dean of Temple University’s School of Media and Communication in Philadelphia.

Arguments around native advertising and sponsored content are often laced with semantics and not everyone sees them as the same thing. The American Press Institute, in a white paper on the topic, uses the terms interchangeably for content that takes the same form and qualities as the publisher’s original content. This content is useful or entertaining and is designed to favourably influence the perception of the brand.

Harber said even when done transparently, and to a set of internal standards, native advertising had major implications for journalism quality: “What will readers make of it when they find a report one week criticising something and then a paid-for report the following week taking the opposite view (as happened recently with one of our local papers)? Will petrol or energy companies be allowed to sponsor stories — made to look balanced and fair — that question climate change? Will pharmaceutical companies be able to pay for portraits of patients thriving on their drugs, and underplaying the costs and dangers?”

Harber feared this would cause audience confusion and short term revenue gains would be offset by a long term loss of credibility and authenticity for quick profit.

Boardman argued that at times the goal of native advertising was to deceive and disguise. “Newsrooms need to be in the discussion about native advertising. I believe it will be a big flame for a short while but will fizzle out because it won’t be an effective form of advertising.”

While editor of The Seattle Times, Boardman found advertisers were always looking to disrupt the reader experience. “There were things we would never do, e.g. have ads on the front page of the newspaper.” While the editorial leadership agonized over this for 10 years, readers did not care whether there were ads or not.

Raju Narisetti, News Corp’s Vice President and Deputy Head of Strategy, (in photo) using examples of business brands like GE and Dell, said corporate marketers were now creating high quality content and wanted to engage with news platforms. In many companies, advertising budgets were falling, but content budgets were growing. Newsroom concerns were addressable and they should work with advertising departments to create standards so that when offered sponsored material, policies were in place detailing the conditions under which the content could be accepted.

Many newspapers, such as The New York Times, were influencing the quality by setting up content studios within their advertising departments, staffed by former journalists from their titles.