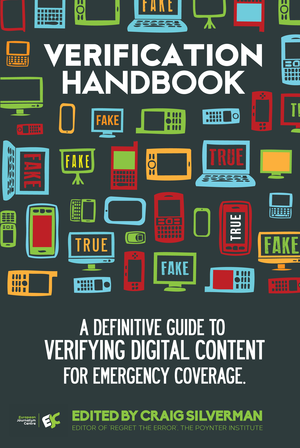 In 2011, when violent protests erupted in England, a number of people claimed a tiger had been let out from London Zoo, and that the London Eye was on fire. During Hurricane Sandy, social media were overrun with photos that were misleading and intentionally tweaked. When the Boston Marathon bombings occurred, 4Chan and Reddit users instigated a large-scale amateur investigation when the FBI released a video of two suspects.

In the best scenarios, social networks dispel heresy just as fast as it is propagates, but the fact is somebody still has to investigate, validate and confirm whether these rumors are true or false. The truth must be verified before it can spread. This is a natural role for journalists to fill, yet many lack the skills needed to verify user-generated content, and to work with the crowd to help source and share the truth.

We are living in an age of information abundance, where user-generated content are readily available to provide first hand documentation of events all over the world. More than 100 hours of video are uploaded to YouTube every minute, and 500 million Tweets are sent per day. As shown in this video released by Twitter about the Great East Japan Earthquake, these platforms are indispensible when news and disaster strike.

This is especially true when new organizations are unable to access a location. This was the case during the Haiti earthquake in 2011 when local media could not operate due to the damage, and only a few foreign correspondents and stringers were in country. Twitter was used to share and gather updates on the ground, allowing journalists to access information that they would not otherwise be able to obtain. The Ushahidi platform was also used to crowd-source situational updates and assemble these into a single map. In the process, aid workers and online volunteers worked together to map and translate the updates.

When an unexpected incident occurs, be it a riot, natural disaster or shooting, newsrooms need to be equipped with the training and processes to source and verify the onslaught of information that circulates both online and off. Newsrooms have in recent years invested in training, tools and teams to improve the sourcing of user-generated content. But many have not yet built out their capabilities and trained staff in how to debunk false information. This is why the European Journalism Centre has developed the Verification Handbook, a free resource that provides step-by-step guidelines on how to deal with UGC during emergencies.

Challenge and triangulate the sources, especially in the digital age

Our fundamental role as journalists is to seek the truth and publish it. We cultivate and rely on sources to help us gather and confirm as much as possible. This is especially true when dealing with firsthand accounts during disasters and other emergencies, whether these accounts come from victims, witnesses or authorities.

The mass of user-generated content, and the sources that provide it, can at first seem overwhelming. However, there are a number of (mainly free) tools available to help verify UGC, and to track down sources. For example, Google tools such as Google Street View and Google Earth can be used to identify the location where UGC was filmed or shot. Google Image Search and TinEye also allow a reverse image and thumbnail search to check where an image was first uploaded, in order to help determine if it’s original and who the original source might be.

Additionally, there are online people search tools such as Spokeo that aid in identifying the person behind a piece of content, and providing the means to content them. This enables journalists to track down and interview the original source of a piece of content — an essential part of the verification process.

The Verification Handbook provides guidance on how to use these tools, drawing from the experiences of leading media organizations. It also offers fundamental advice on the discipline of verification to guide the work of newsrooms. This includes the maxim that we must always verify the source and the content in attempting to determine the authenticity of a piece of information.

Ultimately, the fundamental rules of verification do not change: start from the assumption that you are the information is incorrect, and work to identify challenge, triangulate and compare different sources.

Among the Handbook’s contributors are journalists from Storyful, a news agency solely focused on verifying social media content. They offer an overview of verifying UGC and specific guidance for video content. The BBC News’ User Generated Content Hub provides a detailed guide to verifying images from social media, while The Australian Broadcast Corporation offers a look at how they prepare for disaster coverage, and ensure their people and processes are in place to deliver fast, accurate coverage.

Getting familiar with technology for a better disaster-preparedness

When verifying UGC, it’s essential to have basic knowledge and understanding of how to use technical tools productively. This goes hand in hand with planning for disaster coverage in the newsroom, and offering training in the sourcing and verification of UGC.

There will always be a fundamental human aspect to verification in that someone will make the decision whether a piece of content is true or false. But, as noted by Handbook contributor Patrick Meier in his chapter, we are beginning to see the application of advanced computing to the challenge of verification

Meier, an expert in crisis mapping and the director of social innovation at the Qatar Foundation’s Computing Research Institute, details how a number of academic researchers are analyzing methods to automatically predict the credibility of tweets. There is also a movement to develop free and open source tools such as the Artificial Intelligence for Disaster Response (AIDR), a platform that works with human input to help identify content of interest on Twitter.

“For example, if the Red Cross were interested in monitoring Twitter for references to infrastructure damage following a disaster, then Red Cross staff would use AIDR’s microtasking interface to tag (select) individual tweets that refer to damage,” he writes. “The algorithm then would learn from this process and automatically find additional tweets that refer to damage.”

We are at the early stage of machine-aided verification, but over time it will combine with the free tools detailed above to offer journalists a range of aids and algorithms to help us do our work. This can potentially speed the process — but verification will always require the human element. It will always be left to a journalist to combine the information gathered from sources with the data from tools and what their eyes and ears tell them in order to make a call.

The good news is we have more tools and techniques at our disposal than ever before to help us get it right.

According to the Pew Research Center, about half of both Facebook and Twitter U.S. adult users (equivalent to one-third of the U.S. population for Facebook, and 8 percent for Twitter) gather news on these platforms. Journalists must be present to share the product of their work to verify content, and to participate as a part of the network. Debunking rumors and helping push out facts must be a priority for journalists in an information-saturated world. Our responsibility to verify information from social networks must be married with a commitment to engage on these same platforms.

As Andy Carvin, formerly of NPR, puts it, “When a big story breaks, we shouldn’t just be using social media to send out the latest headlines or ask people for their feedback after the fact (…) We should actively address rumors being circulated online. Rather than pretending they’re not circulating, or that they’re not our concern, we should tackle them head-­on, challenging the public to question them, scrutinize them, understand where they might have come from, and why.”

We need to be more transparent, working with and directing the crowd to determine and promote what is true. Communicating directly and openly on social networks like Twitter and Facebook will strengthen relationships with the public, and build trust in the long run.

Carvin’s work to crowdsource information during events such as the Arab Spring have demonstrated the more people we involve in the verification process, the faster we can gather information. We must also realize the weight that comes with our words on social media, and act accordingly.

“One thing that anyone, journalist or not, trying to collect and verify information during a crisis has to remember is that you are also a source of information for others, when using social media like Twitter or Facebook or Google Plus,” writes Mathew Ingram of GigaOm in his chapter about crowdsourced verification. “That means any unsubstantiated information you post while you are doing your verification work could contribute to the confusion around the event.”

Our role is to debunk, filter, and navigate on social networks through mass open collaboration.

Craig Silverman is an entrepreneurial journalist and the founder and editor of Regret the Error, a Poynter Institute blog about media errors, accuracy and verification. He has also developed a course on digital age verification for the Poynter News University. Silverman serves as director of content for Spundge, a platform that enables professionals to grow and monetize their expertise through content. He previously helped launch OpenFile, an online news startup that delivered local reporting in six Canadian cities. He is the author of “Regret The Error: How Media Mistakes Pollute the Press and Imperil Free Speech”, and his work has been recognized by the U.S. National Press Club, Mirror Awards, Crime Writers of Canada and National Magazine Awards (Canada). He tweets at @craigsilverman.

Rina Tsubaki leads and manages the “Verification Handbook” and “Emergency Journalism” initiatives at the European Journalism Centre in the Netherlands. Emergency Journalism brings together resources for media professionals reporting in and about volatile situations in the digital age, and Tsubaki has frequently spoken on these topics at events, including a U.N. meeting and the International Journalism Festival. Earlier, she managed several projects focusing on the role of citizens in the changing media landscape, and in 2011 she was the lead contributor of the Internews Europe’s report on the role of communication during the March 2011 Japan quake. She has also contributed to Hokkaido Shimbun, a regional daily newspaper in Japan. She tweets at @wildflyingpanda.