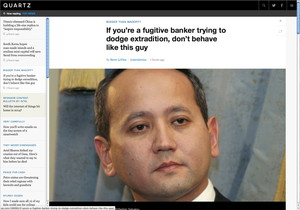 Marshall’s post says “The webpage, largely a hangover from the world of print media, suddenly seems outdated and archaic in a digital world.” Marshall contends that streaming services such as Facebook, Twitter, Instagram and Snapchat have set the tone for web content presentation for the new generation of users.

Thus the trend toward pages that fit on a screen without scrolling is a thing of the past.

Probably the best-known news site to adopt a streaming presentation – for sponsored content as well as news articles – is Quartz from the Atlantic. The New York Times web app uses a similar approach.

Since most sites currently sell advertising based on statistics such as pageviews and impressions, the transition to streams has far-reaching commercial implications. Newer measurement techniques suited to streaming presentation – such as “engagement” – are available but not widely understood, says Marshall. So for the time being, ad sales operations are slowing the transition to streams.

Incidentally, to give users reference points in streams, publishers have exhumed an old presentation device: frames. On Quartz and on the New York Times web app, a narrow frame at the left helps users find individual articles in a stream, which is displayed at the right.