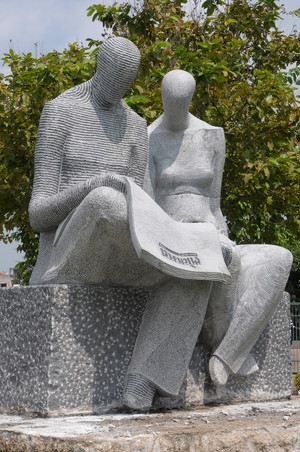 Darda, who is also a Member of Parliament, commissioned two sculptures with important news industry themes from artist Kiran Adate.

The “Freedom of Press” sculpture (pictured) has been carved out of a monolithic block of black marble mined in Bhaislana, a village in the Jaipur district of Rajasthan.

The size and weight of the marble block was such that Adate decided to chisel out the basic form of the sculpture in the mine itself.

After two months of work in the mine, the marble block was transported to its current location at Butibori in Nagpur, Maharashtra where the final “detailing” was done during a six month period. The sculpture stands seven feet tall and is installed on a three foot high black granite block.

Darda also commissioned a sculpture of a critical cog in the wheel of the news industry – the newspaper hawker or delivery boy. Both sculptures were unveiled late last year.

Lokmat Media Pvt. Ltd. is a multi-platform media company with interests in publishing, broadcast, digital, entertainment, community and sports verticals. It has some 3,000 employees and a pan-India network of offices.

Lokmat is the largest read regional language newspaper in India with 23.5 million readers and the No. 1 Marathi newspaper in Maharashtra & Goa states with 11 editions and a circulation of 1.45 million copies. Lokmat Samachar, with seven editions, is one of the largest read Hindi daily in the state of Maharashtra with more than 1.3 million readers. Lokmat Times has three editions.

Lokmat Group also publishes the website www.lokmat.com and has a partnership with Yahoo! to provide content to a co-branded Marathi section on Yahoo! India’s news portal.

In addition, since 2008, Lokmat co-owns a 24-hour news and current affairs channel IBN Lokmat, through a joint venture with the Network18 Group.