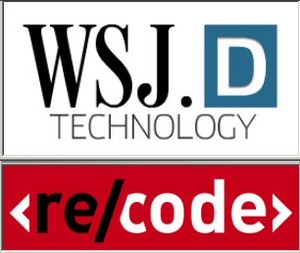 The new section (WSJD) is described as part of WSJ’s expansion of technology coverage around the world, with a growing team of dedicated journalists. “We’re doing this because technology is transforming everything, from our economy to our workplaces, and to the gadgets, apps and software that have become central to our lives,” Krim says.

Announced also was a new digitally focused conference that aims to bring together pioneering entrepreneurs, thought leaders and industry experts from around the globe.

Former partners Kara Swisher and Walt Mossberg of AllThingsD have started a new media company (Revere Digital, with Swisher and Mossberg as co-CEOs) and a website called Re/code, working with the same team of journalists they worked with at AllThingsD. They also announced their own conference, The Code Conference.