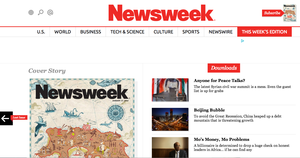 As we reported in early December, Newsweek has gone through a number of changes of ownership and format in recent years, and it abandoned its print edition as of 31 December 2012.

Late last year, only a few months after buying Newsweek, new owners IBT Media announced they would bring back the print edition, which would rely more on revenue from subscribers than it had previously, in order to reduce its reliance on advertising.

Advertising in the forthcoming print product is still intended to contribute to overall revenues, of course, and allowing more time to seek additional advertisers is among the reasons for the postponement until early March, according to a report by Michael Sebastian on the Ad Age website.

Sebastian quotes Scott Miller, Senior VP-Global Sales and Marketing at IBT Media, as saying the delay is not a setback. “We pushed it back to make sure we had enough time,” he said.

Just last week, Newsweek also announced “The New, New Newsweek.com,” and the coming months are likely to prove interesting as the 81-year-old brand makes its return to print.