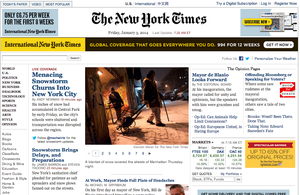 “With more prominent video and photography, the new features are highly immersive and enhance our readers’ ability to share and comment throughout articles,” said Executive Editor Jill Abramson, in a statement announcing the redesign.

In a related story on NYTimes.com, Leslie Kaufman wrote “The redesign will also contain a platform featuring content paid for by advertisers. Such content, known as ‘native advertising,’ has raised concerns among some journalists that it could blur the lines between the editorial product and material provided by advertisers.

“In a letter to employees last month, however, The Times’s publisher, Arthur Sulzberger Jr., promised that native ads would be clearly distinguished as paid posts and that the content would not be produced by newsroom employees,” Kaufman added.

The design changes were previously announced in 2013, and Poynter’s Andrew Beaujon published some images of the planned new look in late October, which had been part of a preview for NYT employees.

In the statement announcing the changes, the company points to 10 highlights of the redesign: