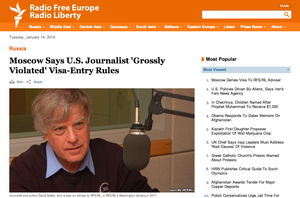 David Satter is known for his perspective on Russia, having first reported on the country in 1976 as the Moscow correspondent for The Financial Times. He has written three books on Russian politics and bureaucracy, all overtly critical towards President Vladimir Putin.

Earlier this week it was revealed that Satter, now an advisor with Radio Free Europe, had his visa application rejected on Christmas day. According to Luke Harding of The Guardian, Satter had travelled to Kiev, Ukraine, to renew his credentials. He was greeted with a prepared statement that read:

“The competent organs have decided that your presence on the territory of the Russian Federation is not desirable. You are banned from entering Russia.”

The Guardian continues, saying that, following the expulsion, US Ambassador to Russia Michael McFaul raised the issue with the Russian foreign affairs ministry. The ministry eventually provided justification, saying that Satter had violated immigration regulations by waiting five days before converting his initial entry visa into a multiple entry visa. The penalty for the breach is five years without access to the country.

When asked by The Guardian for possible reasons his visa was denied, Satter did not have an explanation, but suspected part of the reason may have to do with his writing on the 1999 apartment bombings that killed 300 people.

However, according to the BBC, Satter’s rejection was not related to his criticism of authorities, but rather his visa violations.

In a story on its website, Radio Free Europe/Radio Liberty reported that “RFE/RL President Kevin Klose said in a statement on January 13 that the U.S. Embassy in Moscow was informed of the action against Satter and lodged a formal diplomatic protest.”

Before Satter, the last American journalists to be arrested or expelled from Russia were Newsweek Bureau Chief Andrei Nagorski in 1982, and Nicholas Daniloff in 1986.

These events will further curtail the already rocky relationship between Russia and the United States ahead of the 2014 Winter Olympics in Sochi, which begin next month.