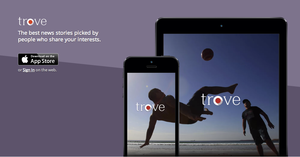 “Trove streams in news from 15,000 sources, making it easy to follow lots of topics,” writes Rob Malda, Chief Strategist and Head of Product at Trove, in a post on Trove’s site describing the newly relaunched application.

On the home screen, there are highlights from the troves — groups of articles — that you follow, along with picks from your friends and major news. Users can then create their own troves based on the articles and stories they find most appealing. After entering a trove name and description, users are able to curate articles to put in their trove, also being able to chose which articles appear on top.

Users (also known as curators) can then follow other user’s troves. In its early stages, Trove has several prominent curators, including Zach Sims, Co-founder and CEO of Codecademy, Rajiv Chandrasekaran, Senior Correspondent at The Washington Post, and Robert Litan, Director of Research at Bloomberg Government.

Trove is, however, joining a marketplace full of similar content-filtering applications, including Flipboard and the recently launched Google Newsstand.

CNBC’s Julia Boorstin equates the new software to Pinterest board but for articles and features. TechCrunch’s Leena Rao says that “Trove’s social news app is a combination between Flipboard and Pulse from LinkedIn.”

Mathew Ingram of Gigaom asked Trove’s Malda about how the new app would differentiate itself from its numerous competitors.

“If Trove is about anything, it’s about connecting people to curators who are experts or enthusiasts in a particular subject,” said Malda.

Ingram expressed doubts as to whether the new app will be successful “… it is late to be launching a socially-driven news-curation app, and Trove’s community-based model requires a large number of dedicated users to adopt a completely new and somewhat proprietary platform. The odds against that happening seem relatively high, but I wish them the best of luck.”

TechCrunch’s Rao voiced similar sentiments, noting Flipboard’s immense growth and the prevalence of apps such as Prismatic and CNN’s Zite.