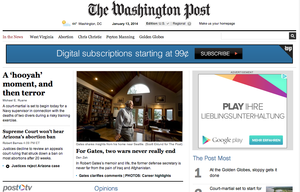 The findings were announced by Searchmetrics, a digital marketing software and services company, on 9 January.

Interestingly, in print, the Post has about one-fourth of the daily circulation of The New York Times and roughly one-third of USA Today’s.

Stories from USA Today and The Washington Post also made up 90 percent of the list of the Top 10 most tweeted newspaper website stories during 2013, according to Searchmetrics.

The company says it “analyzed the number of tweets per week generated by content on 10 leading US newspaper websites using the continuously updated database of search and social network data which powers its software for tracking search and social media marketing activity.”

On another note, while the study looked at the websites of the newspapers and not their Twitter accounts, it is perhaps also worth considering the number of followers many of these publications have on Twitter. For example, as of this writing on 13 January, The Washington Post has 2,384,437 followers, The New York Times has 10,635,656, and USA Today 902,138.

In terms of news stories, a USA Today article that was tweeted more than 400,000 times took the top position in Searchmetrics’ analysis of the 10 newspaper websites’ most tweeted stories of 2013.

The Washington Post, had five stories in the Top 10, including four of the top five, and four are from USA Today. Surprisingly, none is from The New York Times.

2. Newtown shooter Lanza had more than 1,700 rounds of ammunition in his house: 361,259 tweets, The Washington Post

5. Thousands rally outside Supreme Court as it hears cases on gay marriage: 294,681 tweets, The Washington Post