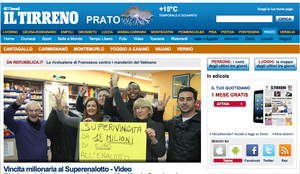 Based in Tuscany, Il Tirreno is owned by Gruppo l’Espresso, which also publishes the major national daily, La Repubblica.

Editor’s Weblog spoke to the editor-in-chief Roberto Bernabo, who explained the challenges of this transformation and the results achieved.

EW: What does it mean for Il Tirreno, being digital first?

RB: The project – which is a pilot project concerning the newsroom of Prato – comes from a total rethinking of the newsroom’s rhythm and workflow. Being digital first means putting content production at the centre, regardless of the platform for which it is created. The main objective for the journalists is producing journalistic content that is of interest for the city. Whether for the website or for the print edition, each journalist focuses on content production, using all sorts of possible tools, from the written word to video, from audio to every multimedia tool, graphics and interactive info-graphics.

What we had to deal with was a profound reorganization of the workflow. We changed the rhythms of the newsroom: once, life in the newsroom started fairly late, while now it begins even before 8 am. We start every day with the analysis on the data we gathered the day before. We use two kinds of data: in-depth analysis of the trends of the previous day’s website, plus real time data.

The website is our priority and all content goes there first. Each journalist is a sort of a social media editor and monitors and follows the life of his/her articles online in the comments section and on social media.

In the afternoon we decide how to adapt and repackage the content for the print paper of the next day.

So being digital first principally means following this new approach, where the priority is on content production rather than on the medium that we use to distribute that content.

EW: Your website is free of charge. How can you make sure that the content you put online for free will still have that added value to justify people paying for the printed version of the paper the next day?

RB: We’re experimenting in this regard too and this is why we started with the Prato newsroom before extending the operation to the entire paper. We are still trying to understand how much overlap there is between the two readerships, that of the website and that of the paper edition. We don’t know yet if the digital-first approach will increase the trend in dropping circulation. It’s too soon to say. The good result we have is that since we started this experiment we have so far quadrupled the number of unique users. That has also impacted the growth of online advertising revenue in the Prato area. Il Tirreno has always been the second newspaper of the city, where the lion’s share has always gone to La Nazione (one of the oldest regional papers in Italy, based in Florence and part of Poligrafici Editoriale publishing group). We have constantly been behind La Nazione but today the online leadership is ours.

Analysing the data we can see that the online growth in Prato is greater than the growth of Il Tirreno as a whole. We are still waiting to take stock of the printed edition but for the moment there is no significant decrease in copies sold in Prato compared to readership in the rest of the region.

This is a test case for the entire Gruppo l’Espresso.

EW: Other than the re-organization of the newsroom, does the digital-first strategy include other experiments?

RB: Yes, the digital-first approach includes other tools. In particular we launched a microblogging platform which aims to develop hyper-local coverage of all the towns in the Prato area, even the smallest. The platform is open to the newspaper’s journalists and contributors but also to the general public. Our goal is to turn Il Tirreno into a real hub for all the local communities. We want to be able to offer in-depth coverage even to the smallest towns.

EW: Is the hyper-local dimension exclusive to this type of newsroom or will it be possible to adapt this approach to a more regional or even national level?

RB: We’re experimenting in new territory. There are a few competitors at a hyper-local level but none of them are very developed. In the local community the role of the printed paper is still very strong but on the other hand the demand for online information is also growing. We’re investing in the sense of community that gathers around shared interests but also identities and values.

RB: We do have a coordinator at a centralised level. The social media editor manages and moderates the comments for example, with a post-moderation approach.
Although making sure that all the comments are appropriate is a first fundamental step, that alone is not enough. That’s why every single journalist monitors the comments below their article and engage personally with the readers, whether on Facebook, Twitter or in the comment space.

EW: Sometimes journalists are the first obstacles to change and are reluctant to fully adapt to the digital transformation. What was the reaction of the Prato newsroom to the digital-first strategy?

RB: I am very glad and proud to say that the newsroom has been participating with great enthusiasm in the changes. The project was worked out  by me and Gruppo l’Espresso in Rome with the active contribution of the newsroom itself. The journey to digital-first is an on-going process and the willingness to adapt plays a central role.
The entire newsroom has been positive and quick to react and learn. It’s the proof that the key thing is to set out on a common path and to involve everyone in the process.