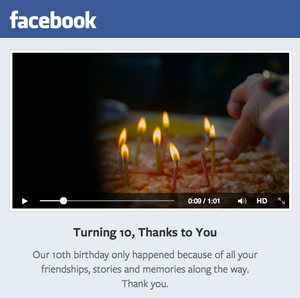 “Today, social networks are mostly about sharing moments. In the next decade, they’ll also help you answer questions and solve complex problems,” Zuckerberg wrote in an anniversary posting on his Facebook fan page. “In the next decade, technology will enable us to create many more ways to capture and communicate new kinds of experiences.”

Facebook, which began as a network for Harvard students on the 4 February 2004, today has 1,23-billion monthly users, according to an article in the Telegraph.

In the decade since, it has become an invaluable tool for journalists. Through content sharing and offering a space to interact with readers, Facebook has enabled journalists and news organisations to build and grow a following and reach more news consumers.

In an article on Journalism.co.uk, Alastair Reid presents ten ways that journalists can use Facebook. Her suggestions include creating groups for people with similar ideas or interests, enabling replies to stories, and choosing to target posts to certain demographics.

Now, as it prepares to tackle the next decade, significant challenges lie ahead. Among the biggest is its declining appeal to teenagers.

A report on iStrategyLabs highlights the clear drop in the number of teenagers that use the site. The number of 13 to 17 year olds dropped by more than 25 percent between January 2011 and January 2014, while users between 18 and 24 years old decreased by nearly 8 percent. Usage amongst both high school and university students fell by 59 percent.

At the same time, its appeal among adults grew. The percentage of users over age 55 rose by more than 80 percent, while the number of users between 35 and 54 increased by 41 percent.

In an interview with CNN, Daniel Miller, a professor at the University College London Centre for Digital Anthropology, suggested that the biggest reason for teenagers gravitating away from Facebook was that their parents now use the network. “Young people want their own thing. They want to be different,” Miller said. With parents having access to their accounts, young people were more restricted in their Facebook usage than before.

For advertisers, the change in demographic is a positive feature. With a rapidly increasing older audience, one with stable employment and more financial security, their ads are now more visible to those able and willing to pay.