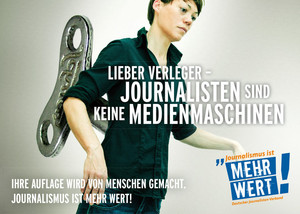 The German Association of Journalists (DJV) is claiming the strikes that began on Wednesday have been successful. The industrial action, led in collaboration with the German Journalists Union (DJU VERDI), aims to improve wage settlements and to increase salaries by 6%.

The strikes have taken place up and down western Germany, according to the DJV. Intended as warnings, they are part of a larger campaign to achieve better conditions for German editors and newspaper workers in the 2013/14 negotiations with publishers. The campaign’s slogan is “Journalists are worth more.”

“Our most important aim is to discourage publishers from going through with their demands for fewer days of holiday and for less holiday and Christmas pay,” Hendrik Zörner, spokesperson for the German Journalist Association (DJV), explained to WAN-IFRA.

The largest action occurred in Tübingen on Thursday, where 400 strikers from 20 newspapers in the region of Baden-Würtemberg came together.

Wolfgang Grebenhof, editor of the Fränkische Landeszeitung, and member of the DJV union, commented, “Dozens of newspapers are on strike because it is all about collective agreements. We do not have all the newspapers out all at the same time. It is a mixed strategy. We do not want to be predictable for the publishers. We have had six rounds of negotiations already, they want to give us less salary, less pay for vacatio and other things. We are asking for six percent increase in wages and that online journalists are part of the agreement.”

The spokesperson for the National Organisation of Newspaper Publishers (BDZV) says, however, that the matter of salaries is especially complicated. “Some aspects of these contracts, which contain 40 year’s worth of growth, supplements and footnotes, are simply not up to date and no longer reflect the working reality of editors,” she said. “Every single part, almost, is grappled over. For this reason the negotiations last so long and are going on the 8th of March now into the eight round.”

“We do not think it is sensible, given this background, that through strike measures pressure should be exerted on the side of the employers. At the same time it is indeed a fair right of editors, to strike for their own interests.”

The next round of negotiations between editors and publishers is due to occur on the 8th of March.