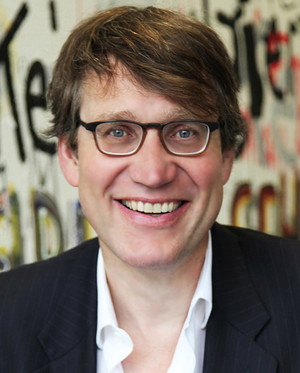 This past October, the Evolok team flew to Berlin, to attend WAN-IFRA’s World Publishing Expo. Berlin, also previously referred to as the ideal place to harness the imagination and ideas of the tech community and invest this in the future of news media, revealed a publishing industry ready to change, adapt and innovate.

Kicking off the digital marathon at the Expo was the Media Hack Day event at Axel Springer’s Plug and Play premises. A host of creative programmers, tech savvy journalists and concept designers took part in a competition whose aim was to innovate the way news is presented to an increasingly digital savvy audience.

“It’s become obvious in the US and certain European countries that digital journalism can’t be a free lunch,” Mathias Döpfner, Chief Executive of Axel Springer told The Wall Street Journal last May.

In this interview, Schmitz, who in his role as managing director of Axel Springer Digital Ventures and Axel Springer Plug and Play, is responsible for the early stage investments of the group. Here he provides a glimpse into the future of media in 2014.

Ana-Maria Leonte: We are in the era of Digital Darwinism when technology and consumers advance faster than the industry’s ability to adapt. Certainly, what happened at the Media Hack Day is proof that the publishing industry itself is trying to keep up with the digital advances. Do you see Axel Springer creating and being more involved in these types of events?

Schmitz: I think we should do more hackathons like this and work with people outside the company. They have great ideas and collaboration help us to build a better offering.

What are the key changes the publishing industry needs to make in order to be more profitable?

One of the changes is to make news more valuable, and identify monetisation opportunities for different types of content. That’s quite a new concept for the industry. We see many services, which are free, but we are developing more valuable services, which can be more easily purchased. This is definitely something we are working on.

There is a sea of content out there and we have to work out which content is more appealing to people to subscribe to or buy. For example, premium services can be:

With the proliferation of mobile gadgets, publishers have witnessed a massive shift from print to online and from desktop to mobile. What other sources of revenues would Axel Springer consider when moving further to this increasingly mobile audience?

We will pursue our goal to become the leading digital publisher. Basically, that means three revenue segments

What is the general feeling with regard to paid-for content in Germany? Will we witness a shift toward a culture of paid-for content on the Internet in Germany just as we have seen happening in the US and some other European countries. Do you believe it is likely in 2014 that we will witness an ascending trend in the adoption of digital monetisation solutions in the German market – be it paywalls 3.0, intelligent apps?

The initial results for our newly introduced brand subscription models gives us reason to be very positive. As a result, we are generating digital sales revenues as well as advertising revenues. Even though we are still at the beginning of our subscription service, in our first interim results we see confirmation of our strategy for paid-for services on the Internet.

In terms of digital development and competitors, where do you see Axel Springer in three years’ time compared to where it is now?

I see Axel Springer even more digital than it is today. We started with 2 percent digital revenue in 2005. Each year we have increased this; I think our digital revenues are now at 40 percent, and we are still growing.

I expect also to see more content related-businesses. The presentation and personalisation of the products will be more sophisticated and I see a huge potential in the location related processing and distribution of information.

When I look at many media products I have the feeling that we, as an industry, have evolved a lot but there is still a lot of room for improvement.

The Media Hack Day organised at the premises of the Axel Springer Plug and Play accelerator is a sign that the publishing industry has no thoughts of slowing down when it comes to digital innovation and what the future has in store. For those who haven’t attended this type of event, this is a short video summary of what the Media Hack Day is all about.

As a result of consistent internationalisation and digitisation, Axel Springer SE today is not only market leader in the German print business, but is also active in 44 countries through subsidiaries, joint ventures and licenses. Axel Springer SE generates more than a third of its turnover with its international business and with digital media.

In Germany, Axel Springer was the first to install a paywall for two of its major publications: BILD and Die Welt.

Die Welt has already registered more than 47,000 subscriptions from its website following in the footsteps of several international newspapers who have adopted a similar strategy.

BILD’s journalistic content is also worth something to readers on the Internet. Only six months after its launch, the BILD brand subscription has already recruited 150,000 full-paying subscribers