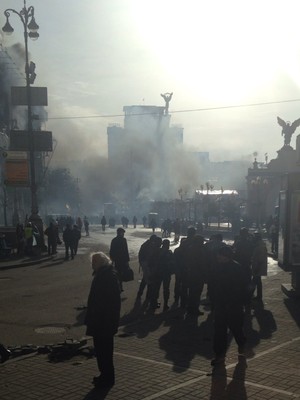 “We were standing in the hotel lobby just off Independence Square, watching streaming video of the events taking place right outside the door. Everywhere we went in Kiev, the images and the commentary were broadcast 24/7 – in restaurants, in all public spaces,” WAN-IFRA Deputy CEO Larry Kilman told staff gathered at the organisation’s Paris headquarters this week, on his return from a press freedom mission to Ukraine.

“This revolution really marked a rise in Internet video streaming and its value in covering unfolding events. It was mesmerizing,” Kilman said.

Tim Vasiliev, a technical specialist and co-founder of one local Kiev live-streaming operation UkrStream, told WAN-IFRA that their most popular livestream had 28 million views, their content was carried by mainstream TV news services across the world and their equipment was targeted by “security forces.”

In this second instalment of our Reporting Kiev series, William Pimlott asked Vasiliev, a technical specialist and co-founder of one local Kiev live-streaming operation UkrStream, about his experience of covering Independence Square.

WAN-IFRA: How does your operation work – how do you source content? And how do you decide where to set up your streams?

Vasiliev: (The) main idea of our website – is to show events without comments, so people can judge… themselves what they have seen. It helps us to be mostly unbiased. Our users receive information through our live-streams and videos, which we receive from our users and/or our partners (media, journalists) or find by ourselves in social media. We place our cameras in places, which on our mind, are the most important to protestors (view from higher point to Maidan Nezalazhnosti and stream from the stage on Maidan Nezalazhnosti are two of them). Also, during the protest we were analysing information from media and social networks and sometimes deciding to mount new cameras in places, which potentially can be turning points, as it was with the stream from Hrushevskogo Str, when there were clashes and the stream from Verkhovna Rada.

Journalists were recruited using personal contacts of members of our team and later using proclamation in our social network profiles and website blog.

Are you or your colleagues placed at risk in the course of your work? How seriously do you regard safety and risk?

Yes, we are worried about our safety and during the first 1.5 months or so, we kept almost full anonymity about who we are. And only after 1.5 months of operations we have started to give information about ourselves. And, of course we received some amount of threats and insults.

What relation does your organisation have with traditional media outlets?

Our live stream were used by huge amount of TV-channels from Ukraine and Russia to UK, Germany USA and Japan (and many other countries). There is no other relationship except that we have provided our picture to them (but, of course, some of our team members have worked on TV-channels earlier).

How many streams do you run at the same time?

Maximum number of streams, that we have run at the time – is five, when the last clashes have begun: we streamed from stationary points and there was one mobile camera on our operator from the center of events. Now we permanently stream only from two points.

How many viewers and hits have you had? Specifically, with regards to the Kiev feeds, how much traction did they get during the height of the crisis last week?

Our most popular stream has 28 million views. What about hits – they are about several millions – not so much related to the traditional media, but it is a good result for us.

And, at least, one-third of them, were scored during the height of the crisis.

Have you received help from foreign organisations (such as Ustream), NGOs or government agencies in your work?

Many organisations and people wanted to help us. Organisations, mostly, offered us to use their services with some discount and, periodically, with huge discount. Ustream, for example, didn’t charge us when we reached overhead of views in our plan and it was extremely large and necessary help for us.

Have the authorities tried to hinder your efforts to release the streams?

If they do so, they do it indirectly. Our cables periodically were cut, radio-signals sometimes were jammed, and once, our camera were broken by special forces.

What help could best be provided by international media organisations?

As our project started on our own funds and, later, funded through donations (we even have once stopped our operations due to lack of funds), we need, mostly, financial support. Also, some of our colleagues have helped us with an equipment – and this is another form of support, that can be provided.