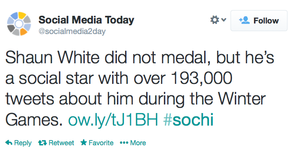 Social media once again proved a major force at the Olympic Winter Games, with more users than ever before taking to Twitter and Facebook to publish their thoughts on events.

Companies aided in the creation of tweets and updates that were then sent from the athletes’ accounts. The more followers an athlete had, the more valuable they became to the sponsor.

The potential for further growth will mean even more opportunities for advertisers and sponsors at future international athletics competitions, including the 2016 Brazil summer games.

According to the International Olympic Committee, in the lead up to the commencement of the games, the IOC’s Facebook page grew by 2 million “likes,” with the first seven days of competition spurring an additional 1 million likes. Meanwhile, the IOC’s Twitter account grew by 100,000 followers during the same timeframe, with 6.5 million mentions of the games.

Twitter’s metrics state that ice hockey was the most mentioned competition, followed by curling, figure skating, bobsled, and snowboard. The most ‘mentioned’ moment of the games was when the United States beat Russia in men’s ice hockey. The event resulted in 72,630 tweets per minute. The most referenced athletes were Mao Asada (Japan), Yuna Kim (South Korea), and TJ Oshie (United States). Countries that sent out the most tweets per 1 million people were South Korea, Russia, and Japan.